Greenhaven Road Capital shared its thoughts on KKR & Co. Inc. (NYSE:KKR) in its Q1 2019 Investor Letter (download here). The fund said that the company has a very strong balance sheet, and a real chance of increasing its AUM and earnings in the future. Aside from sharing its thoughts and analysis on several stocks in its portfolio, the fund also reported its quarterly return, which amounted to 16%. Back to KKR & Co. (KKR), we bring you the part of the letter that examines it:

“KKR& Co. (KKR): This $12.7B market cap alternative asset manager was covered in great detail in the last letter. The company continues to have a very strong balance sheet with two-thirds of the share price covered by cash and investments and a very stable earnings stream from management fees. In fact, excluding the balance sheet, the shares trade on a low single-digit multiple of earnings. Employees own more than 40% of the company and have an excellent track record of generating returns and growing assets. KKR operates in an industry with tailwinds and is growing faster than the industry. While the firm has been in existence for 42 years, they have more than a dozen strategies that are less than 10 years old and still have the opportunity to grow AUM and earnings substantially.”

More specifically, ValueAct Capital was the largest shareholder of KKR & Co Inc. (NYSE:KKR), with a stake worth $995.2 million reported as of the end of September. Trailing ValueAct Capital was Akre Capital Management, which amassed a stake valued at $248.4 million. Pzena Investment Management, Egerton Capital Limited, and Ariel Investments were also very fond of the stock, giving the stock large weights in their portfolios. 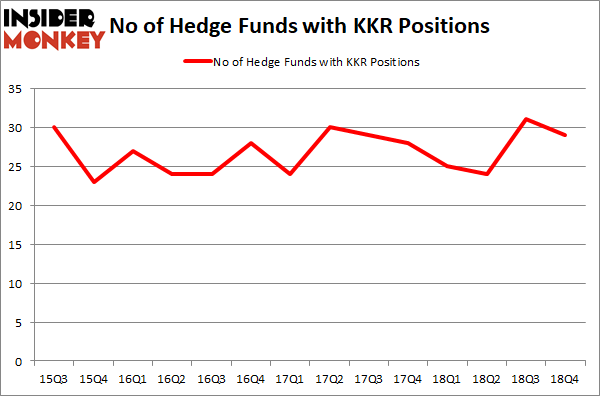