The Greek philosopher Heraclitus stated that you can never step in the same river twice. And, as much is true about investing. The company you buy stock in today is a different company tomorrow, as is the market in which it trades. When markets are hitting new highs, the currents may appear swift and strong, and the rational investor could be forgiven for sitting on the river banks, waiting for the right moment to plunge in. After all, the last time the S&P 500 Index floated in record-breaking territory for an extended period of time was 2007. From October of 2007, when the S&P 500 hit a peak of 1576, to March of 2009, the index lost more than 50% of its value.

While the market eventually recovered, the global economy is still steeped in uncertainty. And we find ourselves again at a crossroads, with the market charging to new highs this summer, only to back off recently in fear of the Federal Reserve’s imminent withdrawal from its $85 billion of monthly bond purchases. The concept of buy and hold isn’t dead, but, given the lack of a clear global economic outlook for the next few years, investors may want to protect themselves with a slightly modified game plan. One potential strategy to replace “buy and hold” could be described as “buy, hold, and calibrate.”

Buy: committing at the top doesn’t have to go wrong
Even the most resolute of investors may rethink clicking “buy” when attractive blue chips, which lead the indexes, are themselves bumping up against records. Consumer goods stalwart Kimberly Clark Corp (NYSE:KMB) is a worthy example. Would you have bought Kimberly-Clark in October of 2007, near its all-time high, trading at approximately 17 times trailing 12-month earnings, in a peak market that recalled the Hitchcock film Vertigo? Quick, make your call… and then view the following: 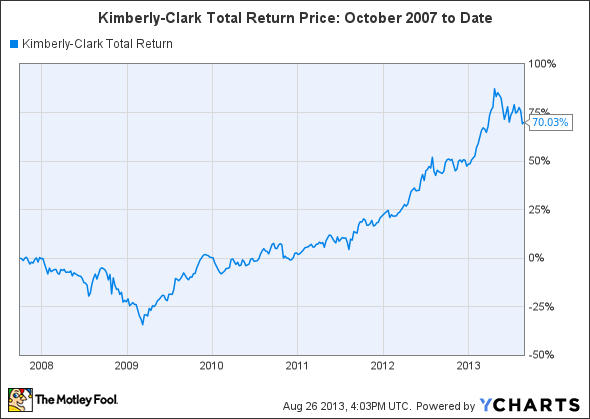 While the market and Kimberly Clark Corp (NYSE:KMB) were both at a peak in October of 2007, this did not mean that Kimberly-Clark was overvalued.  KMB’s 12-month trailing P/E ratio has actually increased, although not wildly, hovering today around a multiple of 20. If anything, looking back, the stock was fairly valued or undervalued, as the company delivered earnings throughout the period and predictable revenue growth as soon as the recession ended. Today, investors are willing to pay a premium for the relative safety and attractive total return of KMB.

The lesson here? The chart bears out that great companies do weather bad periods. But you have to locate organizations with decent earnings power and the potential to increase market share, and you have to take that first difficult step of committing capital.

Hold: it’s not always easy
Even though the macro-economic environment is currently as clear as miso soup, it still makes sense to invest in business models that can absorb a bit of economic volatility. A quality portfolio, heavy on reinvested dividends, hedges against inflation, protects you from missing out on the sometimes rapid periods of appreciation that are characteristic of equity markets.

Now, to confess, we could easily cherry-pick an example here to illustrate the virtues of holding, but let’s look at a tougher call. Lowe’s Companies, Inc. (NYSE:LOW) the second-largest global hardware retailer, naturally faced deep exposure to the crash in the housing market in 2007-2008. Going back again to October 1, 2007, and knowing what has transpired until today — both the difficulty of the recession years, and the S&P 500’s stellar performance this year — would you have held Lowe’s stock the entire time? First let’s look at price performance during the period: 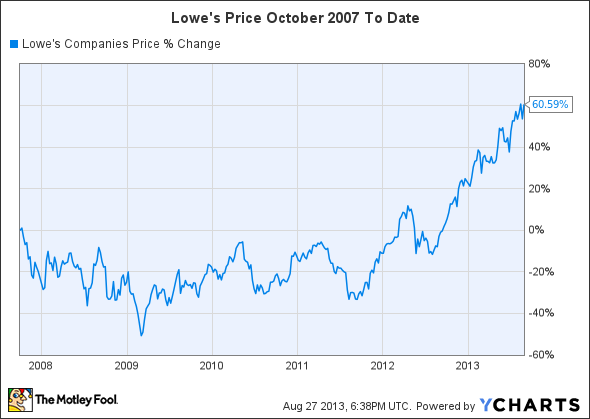 This is actually a pretty credible showing. The tough part would have been hanging on to Lowe’s Companies, Inc. (NYSE:LOW) stock amid construction sector uncertainty and reduced consumer spending during 2009-2011. Moreover, investors would have had to exercise deep patience, as the stock dawdled in a holding pattern for most of the years on the chart. On a more encouraging note, let’s view the same picture with dividends reinvested: 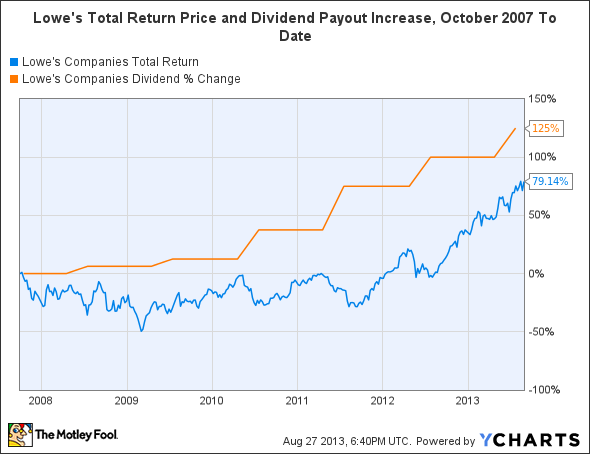 Note that, while the economy slowly picked up, and Lowe’s Companies, Inc. (NYSE:LOW) stock floundered, the company more than doubled its dividend. The impact of reinvesting in the stock while its price was relatively lower proved powerful to Lowe’s investors once the stock came to life, right about this time last year.

Calibrate: It’s all about testing your assumptions
According to that most helpful resource of first resort, Merriam-Webster’s online dictionary, one of the definitions of “calibrate” is “to measure against a standard.” Having an objective basis to measure investments against can give an investor the confidence to follow through on both buying and holding.