During the first half of the fourth quarter the Russell 2000 ETF (IWM) lagged the larger S&P 500 ETF (SPY) by about 4 percentage points as investors worried over the possible ramifications of rising interest rates. The hedge funds and institutional investors we track typically invest more in smaller-cap stocks than an average investor (i.e. only 298 S&P 500 constituents were among the 500 most popular stocks among hedge funds), and we have seen data that shows those funds paring back their overall exposure. Those funds cutting positions in small-caps is one reason why volatility has increased. In the following paragraphs, we take a closer look at what hedge funds and prominent investors think of Kilroy Realty Corp (NYSE:KRC) and see how the stock is affected by the recent hedge fund activity.

Kilroy Realty Corp (NYSE:KRC) shares haven’t seen a lot of action during the third quarter. Overall, hedge fund sentiment was unchanged. The stock was in 12 hedge funds’ portfolios at the end of the third quarter of 2018. At the end of this article we will also compare KRC to other stocks including The Middleby Corporation (NASDAQ:MIDD), ADT Corp (NYSE:ADT), and Sabre Corporation (NASDAQ:SABR) to get a better sense of its popularity.

In the eyes of most shareholders, hedge funds are viewed as unimportant, outdated financial tools of yesteryear. While there are over 8,000 funds trading at present, Our researchers choose to focus on the aristocrats of this club, approximately 700 funds. It is estimated that this group of investors watch over the majority of all hedge funds’ total capital, and by keeping track of their first-class picks, Insider Monkey has unearthed various investment strategies that have historically outrun the broader indices. Insider Monkey’s flagship hedge fund strategy outstripped the S&P 500 index by 6 percentage points per year since its inception in May 2014 through early November 2018. We were able to generate large returns even by identifying short candidates. Our portfolio of short stocks lost 24% since February 2017 (through December 3rd) even though the market was up nearly 23% during the same period. We just shared a list of 11 short targets in our latest quarterly update.

What does the smart money think about Kilroy Realty Corp (NYSE:KRC)?

Heading into the fourth quarter of 2018, a total of 12 of the hedge funds tracked by Insider Monkey held long positions in this stock, representing no change from one quarter earlier. The graph below displays the number of hedge funds with bullish position in KRC over the last 13 quarters. With the smart money’s capital changing hands, there exists a few notable hedge fund managers who were adding to their stakes meaningfully (or already accumulated large positions). 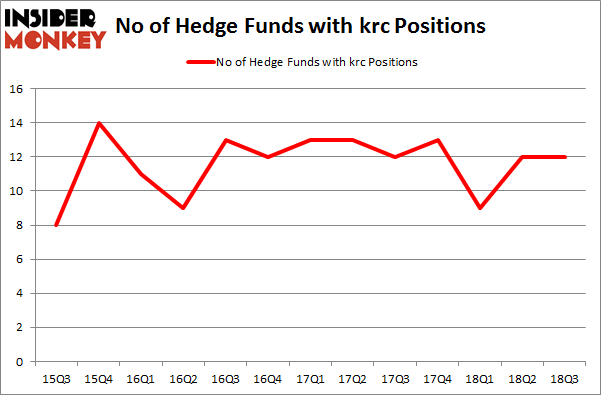 The largest stake in Kilroy Realty Corp (NYSE:KRC) was held by Zimmer Partners, which reported holding $111.8 million worth of stock at the end of September. It was followed by Citadel Investment Group with a $65.3 million position. Other investors bullish on the company included Renaissance Technologies, Balyasny Asset Management, and D E Shaw.

Because Kilroy Realty Corp (NYSE:KRC) has faced bearish sentiment from hedge fund managers, we can see that there was a specific group of money managers who sold off their entire stakes heading into Q3. Interestingly, Israel Englander’s Millennium Management dumped the biggest investment of all the hedgies watched by Insider Monkey, comprising an estimated $11.7 million in stock, and Matthew Tewksbury’s Stevens Capital Management was right behind this move, as the fund cut about $4.6 million worth. These bearish behaviors are important to note, as aggregate hedge fund interest stayed the same (this is a bearish signal in our experience).

As you can see these stocks had an average of 20 hedge funds with bullish positions and the average amount invested in these stocks was $475 million. That figure was $253 million in KRC’s case. Sabre Corporation (NASDAQ:SABR) is the most popular stock in this table. On the other hand Flowserve Corporation (NYSE:FLS) is the least popular one with only 13 bullish hedge fund positions. Compared to these stocks Kilroy Realty Corp (NYSE:KRC) is even less popular than FLS. Considering that hedge funds aren’t fond of this stock in relation to other companies analyzed in this article, it may be a good idea to analyze it in detail and understand why the smart money isn’t behind this stock. This isn’t necessarily bad news. Although it is possible that hedge funds may think the stock is overpriced and view the stock as a short candidate, they may not be very familiar with the bullish thesis. In either case more research is warranted.