We track 13F filings from hedge funds and other notable investors; the most recent round of filings disclosed many long equity positions as of the end of December. Even though the information is a bit old, we have found that the most popular small cap stocks among hedge funds outperform the S&P 500 by an average of 18 percentage points per year (learn more about imitating small cap picks) and we think that other strategies are possible as well. 13Fs can also be mined for initial ideas in a number of categories, including higher yield stocks. Here are five stocks which Ken Heebner’s Capital Growth Management reported owning in its filing which currently pay dividend yields of 3.0% or higher going by current prices and recent dividend payments (or see the full list of Heebner’s stock picks):

Capital Growth Management increased its holdings of Herbalife Ltd. (NYSE:HLF) by 41% to a total of 3.3 million shares. Herbalife, of course, came under attack in December by billionaire activist Bill Ackman of Pershing Square (find Ackman’s favorite stocks); Carl Icahn then attacked Ackman in turn including in an emotionally charged (remote) confrontation on CNBC. Down 47% in the last year, Herbalife now pays a dividend yield of 3.2%, has been increasing its revenue and earnings, and carries a trailing P/E of 9. Quantitatively, it looks like a good value and could be worthy of further research. 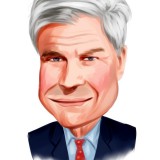 Heebner and his team were selling some of their stake in Ford Motor Company (NYSE:F) between October and December but still closed 2012 with 8.5 million shares in their portfolio. Ford’s dividend yield is 3%, though of course the company is dependent on the broader economy as shown by its beta of 1.6- making it not so much of a defensive pick. Ford and other automakers including GM are often talked about as potential values as U.S. consumers replace an aging auto fleet, and data has been showing a rise in new car sales.

Essex Property Trust Inc (NYSE:ESS), a $5.7 billion market cap real estate investment trust which owns and manages apartment and commercial buildings principally in California, was another of Capital Growth Management’s picks. REITs often pay high yields due to requirements by the IRS in order to maintain their tax status, and in the case of Essex this results in a moderately generous 3.2% yield. Of course, investors may find that a residential housing investor is not well insulated from broader market indices any more than Ford is.

Eastman Chemical Company (NYSE:EMN): Insiders Are Dumping, Should You?

Should You Buy Whirlpool Corporation (NYSE:WHR)?