Over the summer, rising interest rates have been one of the most influential trends in the markets. In my view, that trend will continue, and as such, I have identified five stocks to avoid as the trend plays out.

Just take a look at this graph of mortgage interest rates year to date. The leap in rates from May to August is just staggering. 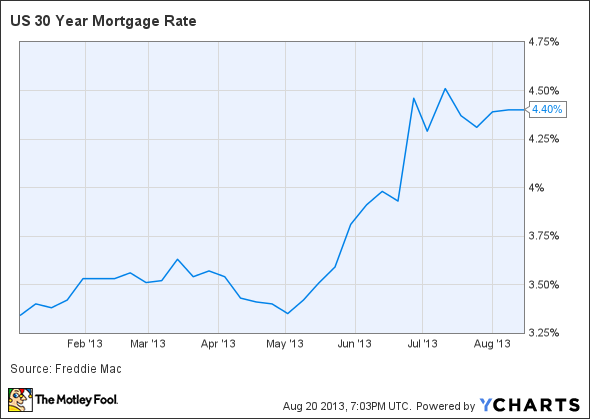 Why are rates rising?
Rates are rising, simply put, because the market is anticipating an end to the quantitative easing, bond buying, and other monetary stimulus policies currently deployed by the Federal Reserve. The sudden spike we see beginning in late May is a result of statements made by Fed Chairman Ben Bernanke, widely interpreted to mean that the Fed would be ending its programs sooner rather than later.

The mortgage industry sees the most obvious impact from rising rates. You can read more about that here. Put simply, banks sell products whose price depends on interest rates. Higher rates equal higher prices. Higher prices means fewer individuals or business will be willing to buy.

Head for the hills
But if you take a step back, the fate of interest rates also has a big impact on another industry: homebuilders.

The relationship can be seen in the chart below, which compares the percentage change in mortgage rates year to date with the stock price performance of five homebuilders. You can see that in May, right at the moment 30-year interest rates begin to skyrocket, these stocks began a nose dive, moving down essentially in unison between 17% and 26%. 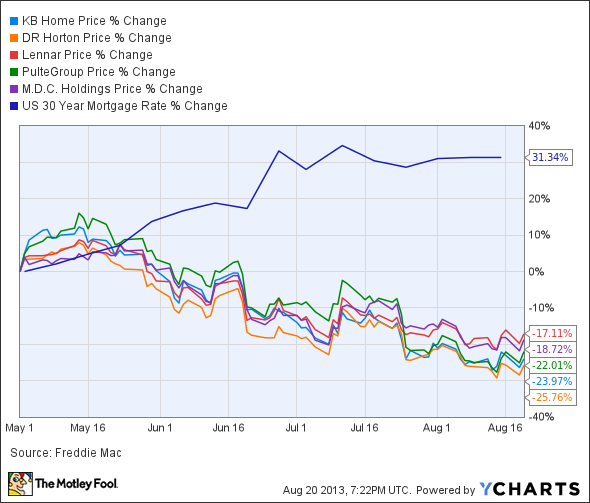 The reason is simple enough: The cost to purchase a home for most Americans is more than just the list price. It also includes the interest rate on the mortgage used to buy the house.