Have you ever seen anyone take notes during a flight, when the flight attendant gives the “in-flight safety instructions?” I haven’t. But if the plane ever went down, I would imagine that most people would wish they had paid closer attention.

Such foresight requires discipline. Probably you’ll walk safely off the plane. But what happens if in the off chance it crashes?
During the 2008 financial panic, two CEOs took this disciplined approach — and capitalized on it.

A few notable company leaders are excellent at looking years into the future.

One great example comes from JPMorgan Chase & Co. (NYSE:JPM). A large reason for the investment bank’s success came from Jamie Dimon’s discipline. He decided to steer the bank away from subprime mortgages when other banks were still waist-deep.

Why would a CEO of one of the largest banks walk away from seemingly endless profits? Because Dimon wagered that sooner or later, subprime would melt down. And it did.

Just like a driver looking a mile ahead to see what’s in the distance, Dimon was able to spot a potential accident waiting to happen. And his foresight enabled JPMorgan Chase & Co. (NYSE:JPM) to swallow up Washington Mutual and Bear Stearns in the process, adding valuable customer deposits, human capital, and even real estate to JPMorgan Chase & Co. (NYSE:JPM)’s list of assets. 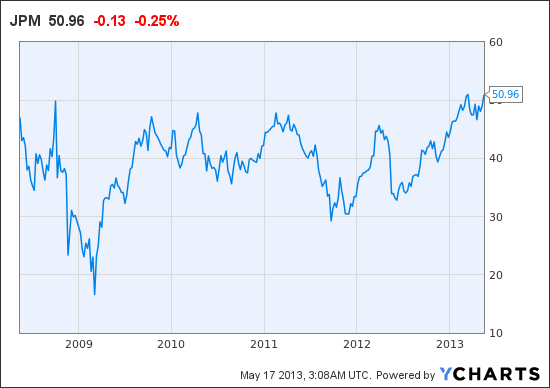 Johnson believed that retail was broken, and that the consumer knew value when he or she saw it. Thus, he nixed coupons and instituted “Fair and Square,” something like an “Everyday Low Price.”

But by eliminating coupons, I think that Johnson far overestimated the rationality of the everyday consumer. In order for Johnson’s plan to have succeeded, consumers would need to:

1. Correctly value a piece of merchandise

2. Be able to calculate the difference between the item’s value and Penney’s “Fair and Square” price.

If Johnson had tested his theory, he would have been able to see this problem coming.  But as he put it: “We didn’t test at Apple.”

There is a reason department stores offer coupons. If they didn’t, they’d be Wal-Mart. Or Dollar General. And what high-end brand wants to sell its goods in Dollar General?

When Johnson was hired, he said that he looked forward to his team being able to “transform the way America shops.” And he has; as my Grandmother said, until Penney’s brings back coupons, “I’ll shop at Kohl’s.”

Almost nine weeks ago, I received a coupon in the mail for Penney’s. It was for $10 off a purchase of $10 or more. I wonder if my Grandmother is willing to change her mind. When it comes to planning for the future, one of the best examples I can think of is Warren Buffett. In 2009, Berkshire Hathaway Inc. (NYSE:BRK.B) snapped up railroad Burlington Northern Santa Fe.