It’s a tough time to be an owner of JPMorgan Chase & Co. (NYSE:JPM) stock. Flip open a newspaper, and it seems the bank is almost constantly in the headlines for some new investigation.

As a sign of how bad it’s gotten, outspoken bank analyst Dick Bove has referred to both regulatory “McCarthyism” and a “government vendetta” when it comes to JPMorgan Chase & Co. (NYSE:JPM). Perhaps an exaggeration, but an illustrative one nonetheless.

While JPMorgan Chase & Co. (NYSE:JPM) is facing some investigations we haven’t seen elsewhere — the London Whale and its hiring practices in China, for instance — we have become too used to seeing headlines about banks being investigated. Whether it’s Bank of America Corp (NYSE:BAC) being sued by the Department of Justice for selling “toxic loans” or Citigroup Inc. (NYSE:C) dealing with antitrust questions in the credit default swaps market, it sadly seems like the normal course of the day to hear about banking shenanigans.

That might seem like a clear signal to not buy a big bank right now. I think the opposite.

Slap-happy with fines
Right now it may seem like there’s no other company on earth that gets fined other than major banks. But that’s relying a bit too much on the frame of the present. Consider this:

In 2011, Johnson & Johnson (NYSE:JNJ) was fined for bribing European doctors. The Securities and Exchange Commission said the company was “using sham contracts, off-shore companies and slush funds to cover its tracks.”

In 2007, Chevron Corporation (NYSE:CVX) offered a multimillion-dollar payout to, as the Houston Chronicleput it, “settle allegations it knowingly purchased Iraqi oil from companies that were funneling illegal kickbacks to Saddam Hussein’s regime.”

Earlier this year, Pfizer Inc. (NYSE:PFE) agreed to pay out $491 million over charges that its Wyeth unit illegally marketed a kidney transplant drug.

Even “don’t be evil” Google Inc (NASDAQ:GOOG) has been caught red handed and agreed to a $500 million settlement with the DOJ in 2011 for allowing Canadian pharmacies to illegally sell to U.S. consumers.

It wouldn’t be very hard to find many more examples like these.

This isn’t to say that it’s OK for JPMorgan Chase & Co. (NYSE:JPM) to cross the law because everyone else is doing it, too. Instead, the point is, when you’re talking about a company with hundreds of thousands of employees (JPMorgan has over 250,000), the statistical probability rises that something untoward is happening somewhere in the ranks.

Slip sliding
The recent spotlight hasn’t been without cost to JPMorgan Chase & Co. (NYSE:JPM)’s stock. Over the past three months, the stock has fallen more than 5%, while the KBW Bank Index (INDEXDJX:BKX) has risen nearly 3%. 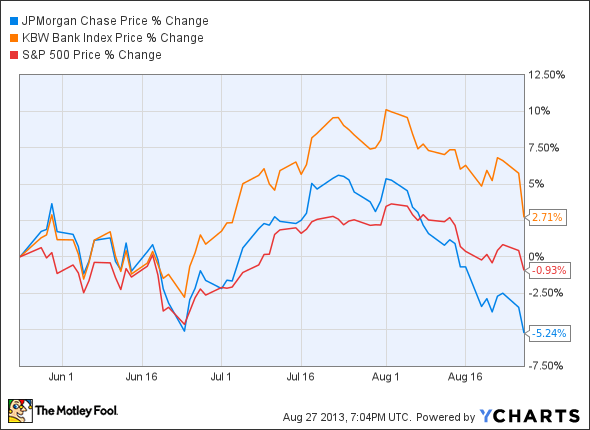 This came even as the bank’s shares already looked attractively valued. With a current price-to-tangible book value ratio of a hair over 1.3 and a trailing-12-month return on equity of 12%, there appears to be a severe disconnect between the price of JPMorgan Chase & Co. (NYSE:JPM)’s stock and the returns the bank produces.

But more importantly
You may still be scratching your head at this point. After all, I’ve still only really told you that JPMorgan Chase & Co. (NYSE:JPM) is a company that’s under investigation on multiple fronts and that those investigations have helped push the stock price down. None of that really adds up to a buy in my eyes.

However, what completes the picture is the fact that JPMorgan Chase & Co. (NYSE:JPM) is a business well worth owning. Or, I should probably say, it’s a collection of businesses worth owning.

It may not be seen primarily as a consumer-facing bank like Wells Fargo & Co (NYSE:WFC), but 50% of U.S. households have a Chase relationship. And among the largest banks — yes, Wells Fargo included — JPMorgan Chase & Co. (NYSE:JPM) has been rated the best for customer satisfaction. Its mobile-banking app has been given top honors as well.