Federal regulators have stepped up the pressure on big banks in a number of evolving legal cases. The Securities Exchange Commission has teamed up with the Justice Department in ongoing investigations.

JPMorgan Chase under the microscope
As has widely been reported, JPMorgan Chase & Co. (NYSE:JPM) has been negotiating a settlement with the SEC in connection with the $6 billion synthetic credit default swap loss. The botched trades by the affectionately named London Whale may result in a new legal precedent as the agency is pushing for an admission of wrongdoing from the big bank. 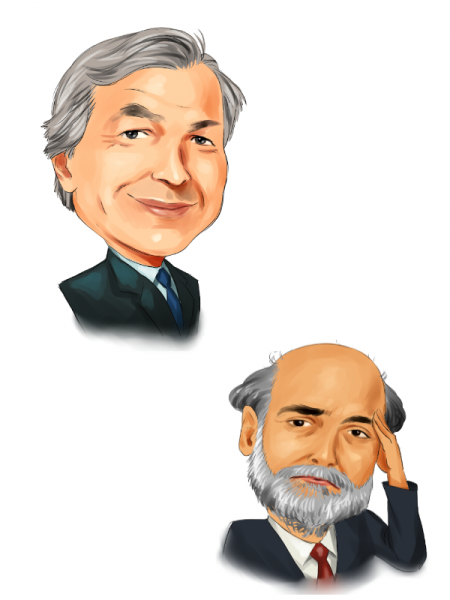 Until now, it has been usual and customary in these civil actions for targeted players to pony up while not admitting or denying wrong doing. This protects the banks from other private legal actions that could arise, and it also protects the traders involved — as well as executives — from the possibility of criminal actions. And the money center banks’ problems don’t stop there.

The agency in tandem with the U.S. Attorney in Manhattan is also bringing criminal charges against two traders in the London office involved with the whale-sized blunder.

Whether they have a case beyond a reasonable doubt remains to be seen. But U.S. Attorney head honcho Preet Bharara spearheaded the criminal probe in the hedge fund insider trading cases that led to 70 or so guilty verdicts and plea deals.

More hot water for Bank of America
Bank of America Corp (NYSE:BAC) continues to face the music regarding offerings of residential mortgage-backed securities that tanked in the years leading up to the financial crisis. The SEC announced yet another case against the bank for defrauding investors by failing to disclose the real situation regarding the “BOAMS 2008-A” series of wholesale loans.

The securities watchdog claims the loans were “riddled with ineligible appraisals, unsupported statements of income,” and other misrepresentations associated with these subprime loans, also known as liar loans. The agency also contends debt-to-income and loan-to-value ratios provided to the investing public were “routinely miscalculated.”

To win the fraud case, the SEC must prove the bank intended to defraud the other investors. And that is a high bar to cross. Meanwhile, the Justice Department is also on the case and is pursuing a parallel civil action. In short, the hits keep coming for Bank of America Corp (NYSE:BAC).

The central bank said banks were applying the tests too generally while failing to fully account for the possibility of falling house prices in determining the value of mortgage-related assets. Earlier this year, the central bank objected to the proposed capital plans of BB&T Corporation (NYSE:BBT) in a squabble over the methods used by the regional bank in valuing its assets.

Bank of America Corp (BAC) Hedge Fund Data Is Mixed: What It Means For You