J&J has increased its payout by an annual compound average of 11.5% over the last decade. That’s the 12th-most generous policy increase among the Dow’s 30 members. Its 3% yield ties for 10th place alongside fellow household name The Procter & Gamble Company (NYSE:PG), but consumer goods specialist P&G can’t quite match Johnson’s dividend increases. Moreover, P&G shares have gained 29% over the last year in dividend-adjusted terms — respectable, but not even close to Johnson’s 44% jump. That 3% dividend yield looks all the more respectable against that rapid rise, which serves as a headwind for rich yields.

Now, a large chunk of J&J’s outperformance happened in the last year. The company seems poised to make a mint on Obamacare. CEO William Weldon even voiced public support for the controversial policy in 2011. The Procter & Gamble Company (NYSE:PG) investors, on the other hand, can’t hang their hat on that catalyst. So in some ways, it’s not a fair fight.

Then again, Obamacare is coming, and J&J can sit back to reap the rewards. There’s nothing wrong with cashing in on a policy change, even if it’s a controversial one. So this one-time catalyst is set to play itself out over the next few years, giving Johnson & Johnson (NYSE:JNJ)’s shares even more fuel for higher share prices and more generous dividends.

And when you get right down to brass tacks, J&J’s dividends help a fairly mediocre long-term performer beat its Dow peers by a significant margin. Rock-steady dividend increases play a large role in this story, and long-term shareholders collect all the benefits. 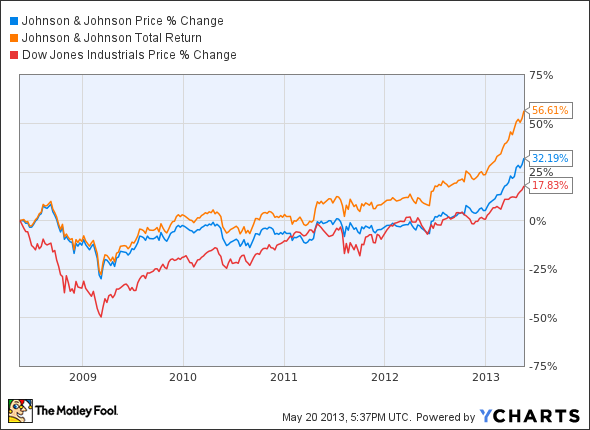 The article How Dividends Change the Game for Johnson & Johnson Stock originally appeared on Fool.com and is written by Anders Bylund.

Fool contributor Anders Bylund holds no position in any company mentioned. Check out Anders’ bio and holdings or follow him on Twitter and Google+. The Motley Fool owns shares of Johnson & Johnson.