Johnson & Johnson (JNJ): Why The Walt Disney Company (DIS) Buys All the Premium Character Collections It Can Find

Every so often, The Walt Disney Company (NYSE:DIS) faces an uncomfortable dilemma. The copyright on Disney’s most prized character, Mickey Mouse, won’t last forever, and the expiration date is drawing close again. The Mouse is slated to enter the public domain in 2018.

That’s why The Walt Disney Company (NYSE:DIS) spent $4.1 billion on Star Wars studio Lucasfilm last year. It’s also a big reason behind the $4 billion Marvel deal in 2009. Mickey’s copyright woes may even have played a part in the crucial 2006 buyout of Pixar for $7.6 billion.

Mickey Mouse doesn’t exactly jump out and greet you at this Disney store. It’s a sign of the times.

The Walt Disney Company (NYSE:DIS) CEO Bob Iger is busy constructing a framework of top-shelf characters to replace Mickey’s iconic profile at the heart of the company. Buzz Lightyear can’t do it alone, nor can Spider-Man or Wolverine. Even Luke Skywalker is a stretch.

So The Walt Disney Company (NYSE:DIS) is diversifying into a number of clearly defined niches. Each one comes with a central cast of characters that can carry The Walt Disney Company (NYSE:DIS)’s branding flag when Mickey steps aside. In-house princesses from Snow White to Merida cater to a mostly young, female audience. Marvel’s superheroes and villains do the heavy lifting for older boys, with Darth Vader and Yoda coming up behind them. The Pixar stable has something for everyone.

I don’t know if you’ve noticed, but Mickey’s stature is already shrinking. Disney hasn’t even made a direct-to-video feature starring him since 2004. These days, the Mouse only stars in video games and The Walt Disney Company (NYSE:DIS) Channel TV shows. And it’s for good reason. When Mickey’s copyright expires in 2018 — just five short years away — the market may (and probably will) be flooded with knock-offs. Disney also holds a fiercely protected trademark on Mickey, so nobody can pull off a complete rip-off job, but the iconic mouse ears and the rest of the design will become fair game. Compare this to how anybody can make and sell adhesive bandages, but only Johnson & Johnson (NYSE:JNJ) can use the Band-Aid brand.

Barring another miraculous fourth-quarter save, which doesn’t seem likely this time, Disney needs to adjust to this upcoming legal reality. Mickey copies will be everywhere under a variety of new names, diluting the character’s value.

But Disney plans to remain relevant and profitable, with or without Mickey Mouse in the spotlight. Disney became a Dow member in 1992, purely on the strength of its homebrew (and old public-domain) characters. The stock largely kept pace with its Dow peers in the early years of index membership, but it has absolutely crushed the Dow recently. 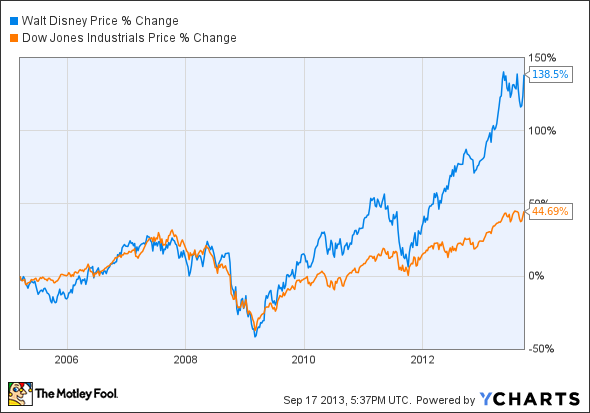 That’s Mickey’s scheduled replacements flexing their muscles. I think they’ll be more than ready when the baton is passed in 2018.

The article Why Disney Buys All the Premium Character Collections It Can Find originally appeared on Fool.com and is written by Anders Bylund.