It’s amazing how much you can learn from a single chart sometimes.

Take a look at the picture below. You’ll find the recent gross-margin trends for three Dow Jones members. They tell three very different stories that speak volumes about the business models involved. 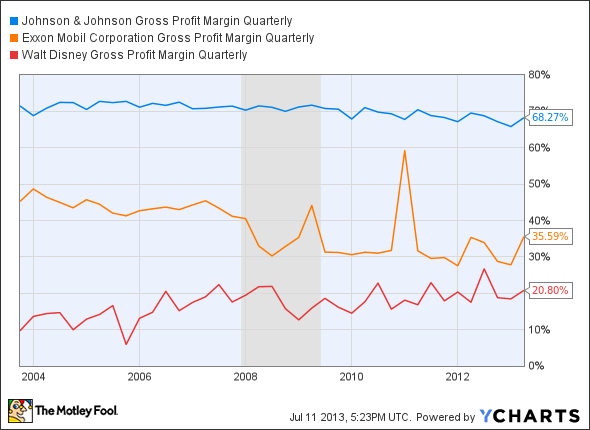 Let’s start with pharmaceutical and consumer goods giant Johnson & Johnson (NYSE:JNJ), sliding along at the top of the chart.

Johnson & Johnson (NYSE:JNJ) didn’t care much about the recession. When you’re dealing in consumer goods — and commoditized ones at that — the economic landscape doesn’t seem to matter much. No matter the size of your paycheck, you still need day-to-day staples like first-aid medications and baby shampoo.

This means that demand for Johnson & Johnson’s core products will always be fairly stable, come hell or high water. The stock may not be a barn-burning growth vehicle, but you can stick this share under your pillow and sleep soundly for decades. The Dow has returned a dividend-adjusted 5.1% per year over the last two decades. Johnson & Johnson (NYSE:JNJ) shares have soared 14.1% a year in the same period.

Family entertainment may not be a necessity like basic health-care items, but Disney’s brand power overrides that potential weakness. On top of that, the House of Mouse has made a number of astute acquisitions in recent years — household brands such as Marvel, Pixar, and Lucasfilm. Careful stewardship of that growing content library helps The Walt Disney Company (NYSE:DIS) raise prices on movie licenses, cruise tickets, and theme park passes without scaring away customers.

Our final ticker today is oil and gas giant Exxon Mobil Corporation (NYSE:XOM). America’s largest petroleum-pumper runs a cash machine like no other (well, certain fruit-flavored electronics companies excluded), but its profit doesn’t flow from a rock-solid base like Johnson & Johnson (NYSE:JNJ)’s and The Walt Disney Company (NYSE:DIS)’s do.

Amazon.com, Inc. (AMZN) Wants to Bring Out the Writer in You
Monthly Newsletter Strategy
Download a free copy of our newsletter and see the details inside!
Hedge Fund Resource Center
Billionaire Hedge Funds