Investors have been shifting out of investments that protect against rare, but catastrophic risks. With the market near all time highs, those risks are still very real. Investing in low beta stocks like Johnson & Johnson (NYSE:JNJ), McDonald’s Corporation (NYSE:MCD), and The Procter & Gamble Company (NYSE:PG) can help protect against some of that downside.

According to Reuters, hedge funds designed to protect investors from large, unexpected losses are seeing outflows. These types of funds became very popular after the 2007 to 2009 recession and associated market crash. Indeed, many believed the housing crisis that led to this turbulent period was a black swan event. As time has passed, however, investors’ concern about another drop seems to be diminishing.

However, some market watchers, including mutual fund manager John Hussman, continue to warn that markets are overstretched. Hussman’s data driven analysis recently led him to write: “…stocks are not cheap, but are instead strenuously overvalued. The speculative reach for yield, encouraged by the Federal Reserve, has created another bubble – which is not recognized as a bubble only because distorted profit margins create the illusion that stocks are reasonably valued.”

Beta is a measure of sensitivity to the broader market. A beta of one suggests that a stock will move in lockstep, up and down, with the overall market. A beta below one means that a stock is likely to move less than the market. Here are three large companies with betas below 0.5: 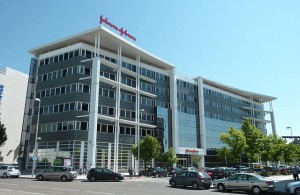 Johnson & Johnson (NYSE:JNJ) operates in three businesses: consumer products, medical devices, and pharmaceuticals. It is an industry leader in each. Although the shares have started to trend up of late, the last decade or so has seen them stuck in a broad trading range. Patent expiration concerns in the pharmaceutical business were largely to blame for that. However, the company has recently achieved some notable product launches and has a decent pipeline. So, this segment appears to be doing much better.

Consumer products, meanwhile, has been hampered by production problems and recalls. While never a good thing, Johnson & Johnson (NYSE:JNJ) appears to have the issue under control. This laggard group should again start to contribute. And, the medical devices business just consummated a big acquisition that should help drive sales and earnings.

In all, Johnson & Johnson (NYSE:JNJ) appears set to prosper over the near term. Moreover, it has a near 3% dividend yield, a long history of annual dividend increases, a world-wide business, and a moderate level of debt. Add in a low beta and this diversified healthcare giant is a good option for just about any investor.

Related Insider Monkey Articles
The Procter & Gamble Company (PG): Is It on the Road to Recovery?Abbott Laboratories (ABT): Yawn All The Way to Retirement With ItSarepta Therapeutics Inc (SRPT), Pharmacyclics, Inc. (PCYC): Are These Billion...Merck & Co., Inc. (MRK): One Potential Roadblock For A Stock Runup

Manitowoc Company, Inc. (MTW): Is the Market in Denial About This Stock?