Johnson & Johnson (NYSE:JNJ), together with its subsidiaries, is engaged in the research and development, manufacture, and sale of various products in the health care field worldwide. The company operates in three segments: Consumer, Pharmaceutical, and Medical Devices & Diagnostics. This dividend king has paid dividends since 1944 and has managed to increase them for 54 years in a row. Dividend increases have been like clockwork every year for decades.

Among the funds tracked by Insider Monkey, Johnson & Johnson gained some popularity during the first quarter, as the number of funds with long positions went up by five to 77, while the aggregate value of their holdings increased to $5.25 billion from $4.16 billion and represented 1.80% of the company’s outstanding stock at the end of March. Billionaire Ken Fisher’s Fisher Asset Management reported holding 10.85 million shares of Johnson & Johnson in its latest 13F filing.

The company’s latest dividend increase was announced in April 2016 when the Board of Directors approved a 6.70% increase in the quarterly dividend to 80 cents /share. The company’s peer group includes Novartis AG (ADR) (NYSE:NVS), Pfizer Inc. (NYSE:PFE) and Roche Holding Ltd. (ADR) (OTCMKTS:RHHBY).

Over the past decade this dividend growth stock has delivered an annualized total return of 9.70% to its shareholders.

The company has managed to deliver 4.70% average increase in annual EPS over the past decade, which was slower than the rate of dividend growth. Johnson & Johnson is expected to earn $6.59 per share in 2016 and $7 per share in 2017. In comparison, the company earned $5.48/share in 2015. 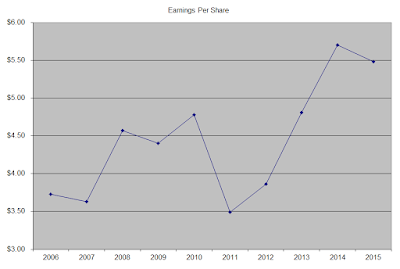 Johnson & Johnson has a diversified product line across medical devices, consumer products and drugs, which should serve it well in the future. This makes the company somewhat immune from economic cycles. Investors looking for a safe and dependable earnings, can look no further than Johnson & Johnson. In addition, the company has strong competitive advantages due to its scale, leadership role in various diverse healthcare segments, breadth of product offerings in its global distributions channels, continued investment in R&D, high switching costs to users of its medical devices, as well as its stable financial position.

The ability to generate strong cash flows, have enabled Johnson & Johnson to reward shareholders with a higher dividends for 54 consecutive years.

Future profits growth could come from new product offerings, which are the result of continued investment in research and development, and through strategic acquisitions. The company spends approximately 11% – 12% of sales on Research & development. Newer drugs like Xarelto, Imbruvica, Invokana could offset potential losses in sales in drugs whose patents expire, and could fuel sales growth for the company. Johnson & Johnson is also constantly trying to use its advantages of scale to achieve efficiencies and generate as much as $1 billion in operational savings by 2018.

Johnson & Johnson (NYSE:JNJ) is also expanding its business through strategic acquisitions. For example, the acquisition of Synthes, made it a leader in fast growing trauma market. This also allowed the company to use its overseas cash without having to pay the steep repatriation taxes. Emerging market growth and opportunities for cost restructurings should further help the company in squeezing out extra profits in the long run. The company is sitting on $38 billion in cash and cash equivalents, which could provide the fuel behind further accretive acquisitions.