Stock buybacks, which is when a company repurchases and “retires” shares of its own stock, have been getting a lot of attention lately. Many large companies have been repurchasing shares for at least a couple of years, and 2013 is likely to see even more activity.

Many are skeptical of buybacks, myself included. Some see it as a waste of money and have learned that management teams are usually poor at timing the market. Consider that buybacks were practically nonexistent throughout 2009: exactly the perfect time to be repurchasing shares.

Value investors will often cite a stock’s “fair value” when speaking of buybacks. Any time a company repurchases its own shares when the stock’s trading above fair value, they argue, value is destroyed. Worst of all, reducing share count is a favorite method for management to increase its own compensation:  earnings per share is often an important metric in determining compensation for a company’s managers.

When looking at a buyback, it’s important to ask two questions: first, what’s the benefit? Second, is it fiscally responsible? Today I am highlighting three companies whose buyback programs are both fiscally responsible and deliver long-term benefits to shareholders.

Diversified medical holding company Johnson & Johnson (NYSE: JNJ) repurchased nearly $13 billion of its own stock last year, a 5.7% chunk of the company’s current value. This was one of 2012’s largest buyback programs, and I believe it was a prudent one considering the stock’s value throughout last year.

We see that the company’s huge buyback and substantial dividend greatly exceed the free cash flow. This usually means that the company must finance the difference, a practice I generally frown upon. Johnson & Johnson (NYSE: JNJ), however, actually used a large chunk of its big cash position to buyback these shares. In this case, it is excusable because the stock was trading below its “fair value” all through 2012.  This value creation yields a clear benefit. 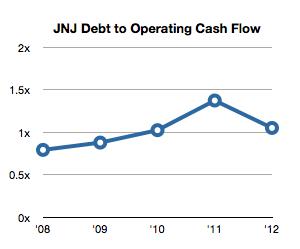 Is the buyback responsible? As I mentioned, management is using its reservoir of cash to buyback the stock and is not taking out any more debt. Thankfully, relative debt levels have been held in check in the recent year. This actually comes from a reduction in debt between 2011 and 2012. So, this buyback meets criteria number two as well. 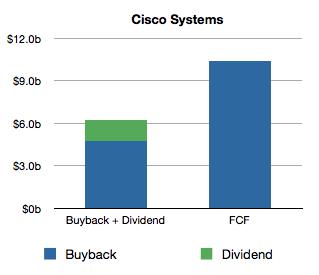 Meanwhile, the company’s debt has declined relative to operational cash flow, partially as a result of a more responsible buyback. Cisco has righted the ship in 2012.