Sales at America’s automakers have been going great guns these past few quarters, and you’d think that would be great news for the companies that make parts for all these shiny new autos. In some cases, you’d be right to think that. But in at least one case — the case of Johnson Controls, Inc. (NYSE:JCI) stock — you’d be very, very wrong.

Shares of auto-parts makers such as Lear (NYSE:LEA) and Magna International (NYSE:MGA) have rocketed this past year, outperforming the S&P 500 with 46% and 56% returns, respectively. Yet Johnson Controls, Inc. (NYSE:JCI) stock has lagged the market average by more than five points. Why?

Worse, when you lay the three companies side-by-side, you can plainly see that Johnson Controls, Inc. (NYSE:JCI) generates far less real cash profit than its rivals do. Its free cash flow yield is the worst of the bunch: 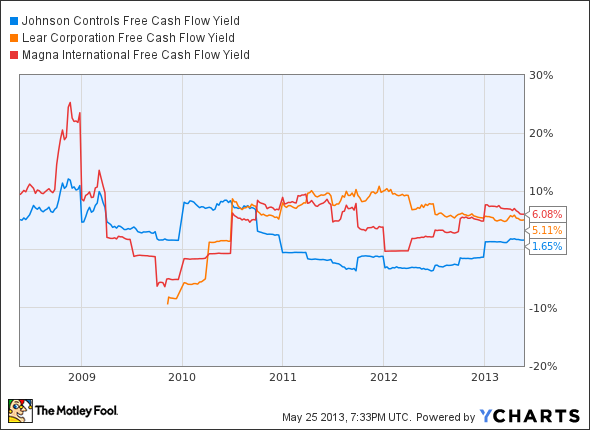 Johnson Controls grows too slow
Johnson Controls, Inc. (NYSE:JCI) stock is no great shakes when valued on more traditional “GAAP” earnings, either. Fact is, over the past five years Johnson Controls stock is the only one of the three that has seen earnings actually decline: Johnson Controls stock is going nowhere
Of course, there’s still the old investing truism to consider — that investing isn’t about what a stock has done in the past, but what it might do in the future. Problem is, despite the shrinking earnings that are giving it a smaller earnings base to grow from in the future, Johnson Controls stock is still expected to be the slowest grower of the group: