JetBlue Airways Corporation (NASDAQ:JBLU) investors, remember these names: Albuquerque, Philadelphia, Medellin, Worcester, Port-au-Prince, and Lima. By the end of 2013, JetBlue will have added all these cities to its routes; the first three are already active, alongside new routes to JetBlue’s existing cities. All these moves carry great growth potential for the company — but the other obstacles JetBlue’s facing should curb investors’ potential enthusiasm.

In addition to a sluggish macroeconomic environment, JetBlue Airways Corporation (NASDAQ:JBLU) has to contend with increased costs from maintaining and repairing its aging fleet. Assuming fuel prices average $3.13 per gallon, JetBlue expects cost-per-available seat mile to jump 2.5%-4.5% in 2013.

Before this news gives you the blues, remember to look on the bright side. JetBlue Airways Corporation (NASDAQ:JBLU) has now delivered 13 consecutive profitable quarters. It also generated $402 million in cash in the second quarter, $152 million of which it used to pay down its debt. By reducing the interest on its debt payments, JetBlue will be able to seize more growth opportunities.

United Continental Holdings Inc (NYSE:UAL) and Southwest Airlines Co. (NYSE:LUV) seem to be heading in opposite directions. United Airlines might be the largest airline in the United States, but considering how challenging this industry gets, that size and scale only means more problems.

Consider some key metric comparisons for these three airlines:

Looking at these numbers, it’s clear that United Airlines isn’t likely to offer a better investment opportunity than JetBlue or Southwest Airlines at this point in time. If you’re still not sold on this point, then consider annual revenue and EPS comparisons. 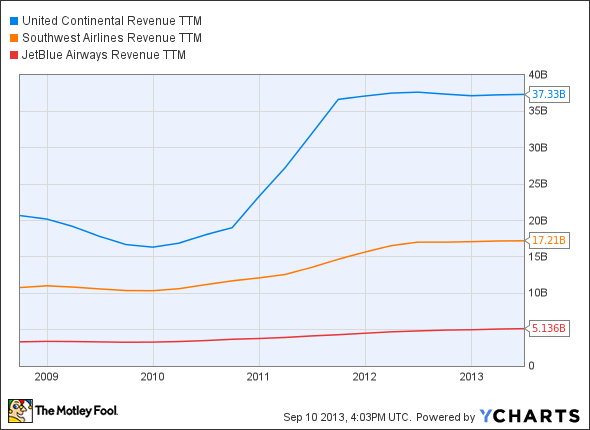 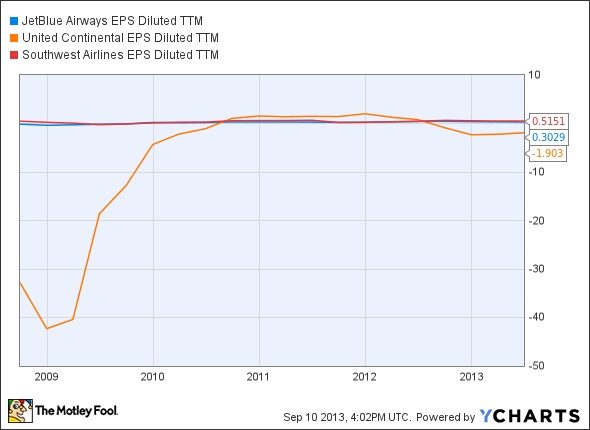