JDP Capital: “Spotify (SPOT) Delivered Remarkable Progress in the First Half of 2021”

JDP Capital Management, an investment management firm, published its second quarter 2021 investor letter – a copy of which can be downloaded here.  A portfolio return of 7.26% was recorded by the fund for the second half of 2021, underperforming its S&P 500 benchmark that delivered a 15.25% return for the same period. You can view the fund’s top 5 holdings to have an idea about their top bets for 2021.

In the Q2 2021 investor letter of JDP Capital Management, the fund mentioned Spotify Technology S.A. (NYSE: SPOT), and discussed its stance on the firm. Spotify Technology S.A. is a Stockholm, Sweden-based music streaming services provider, that currently has a $46.4 billion market capitalization. SPOT delivered a -22.70% return since the beginning of the year, while its 12-month revenues are down by -7.59%. The stock closed at $243.24 per share on July 16, 2021.

Here is what JDP Capital Management has to say about Spotify Technology S.A. in its Q2 2021 investor letter:

“Spotify (SPOT) delivered remarkable progress in the first half of 2021 that turbocharged the platform’s value proposition for audio asset owners, creators, and consumers.

Recent achievements in expanding the global footprint to 178 countries, the roll-out of the Open Access Platform, and the launch of live audio (Greenroom) have elevated the company from a purely consumer-facing product to a monetization tool for talk and music asset owners.

Yet the stock was down 12% in the first half and we think investors are missing the boat by trading the stock based on short-term KPIs like changes in premium subscribers. In May we had added to the position at an average price of $217. Although this price was roughly 80% higher than our 2018 basis, we think the upside is more compelling now than when we initially invested.

Fifteen years ago, Spotify revived the value of the recorded music industry by inventing a legal way for music to be streamed on-demand. But the monetization of audio has not evolved as fast as other media that got a tailwind from social media.

The global value of music copyright was only $31 billion in 2019. It is a headscratcher to think that something consumed 3.8 hours per day by the average adult is only the size of the banana industry.

Even more eye-popping is that the global value of podcast advertising revenue is only $1 billion today, or less than half the size of the market for those little disposable plastic lighters sold at the gas station.

In April Seth and I interviewed Matthew Drengler from data analytics Podsights about the industry’s progress in addressing technological challenges around programmatic podcast advertising, and Spotify’s position in the ecosystem.

Audio’s growth has been held back partly because of the unique challenges of discovery, searchability and consumption with traditional social media platforms designed for video clips, pictures and headlines.

It is normal to scroll your LinkedIn, Facebook or YouTube feed and consume pictures, videos and headlines posted by others that are loosely related. But consuming songs, podcasts and books require much more of someone’s attention than a video clip or picture. Sharing your favorite song or podcast on Instagram is easy; getting your followers to complete a song or podcast just because you shared a link it is not realistic

Although music clips as background for user-generated videos is growing, at least 30 seconds of a song needs to be played in order to trigger a traditional streaming royalty payment.

Unlocking the potential of social audio requires a different approach than traditional social media which was purpose-built for advertisers, not creators or consumers.

• In February Spotify launched in 86 new markets including the coveted South Korean market, areas in Africa, Asia and Latin America that it was not in previously. It goes without saying how valuable this could be for a musician or podcast host to have instant access to audio consumers from 91% of the world’s countries in a single app.

• Spotify can now focus on building out content in each country and make capital allocation decisions based on localized opportunities. As an example, in June, Spotify signed an exclusive podcast deal with Ranveer Allahbadia in India. Ranveer is the host of The Ranveer Show which is one of the most successful news and talk show podcasts among young audiences.

Daniel Ek, Spotify Q1 2021 Earnings Call: “We are ramping up quickly, evolving our content and adjusting our product as we learn about what makes the most sense on a hyper-local level.”

• In May Spotify launched the Open Access Platform (OAP) which is the most significant development in the company’s creator-first strategy since we have owned the stock. OAP allows talk audio owners to be hosted on Spotify’s Anchor platform and retain complete control over subscriber emails and outside payment systems. If the audio owner does not have an existing billing system, Anchor will offer one via Strip, for a 5% fee after 2023 (free until then).

• OAP makes Spotify the first major content aggregator to move from walled-garden to open-platform, allowing content owners to write the terms in which they interact with the platform.

• OAP provides a structural advantage over what Apple is able to offer creators with the existing App Store rules. Apple’s copy-cat version is offering podcast owners the ability to charge a premium subscription using three standard Apple-only options for a15% to 30% cut. However, Apple does not allow the audio owner to collect subscriber emails or use a pre-existing payments system.

• OAP is especially valuable for large media companies that use podcasts as a top-offunnel for a larger offering (eg. New York Times). What does Spotify get out of this? The podcast/audio book owner can voluntarily use the Spotify Audience Network to sell ads and split the revenue, or use other monetization tools on the platform (Greenroom/Live, playlists, Podz AI-generated audio clips for social media distribution, etc.) Spotify is betting that content owners will pay for audio-specific tools to develop new models for maximizing the value of fans.

Spotify press release, April 27, 2021: “At Stream On, we announced the Spotify Audience Network–a first-of-its-kind audio advertising marketplace in which advertisers of all sizes will be able to connect with listeners consuming a broad range of content. We’ve already unlocked Megaphone publisher inventory via the network, and starting on May 1 (2021), we will begin to open Spotify Audience Network to select independent creators using Anchor, so more people can have access to this unique tool…

…We believe this technology will enable more creators to make meaningful revenue from their podcasts by providing much better value to advertisers than existing podcast advertising solutions that use RSS. This will ultimately bring more dollars (and more-efficient spending) into the space, benefiting creators who choose to monetize through advertising.”

• Spotify’s Two-Sided-Marketplace is an example of a business built on top of the streaming “rails” and allows music owners to pay for marketing tools and fan data. In time we think more businesses will be built by content owners to leverage the declining friction to build audio audiences.

• For those interested in a deeper dive, Spotify’s Chief R&D Officer Gustav Soderstrom was recently interviewed by the Means of Creation podcast and discussed the company’s vision for audio creators in detail; this might be most insightful interview on the company’s strategy that I have heard in a while.

• In June Spotify launched its live audio feature called Greenroom. Greenroom is similar to Clubhouse, Twitter “Spaces” and Facebook “Live” where users create a virtual room and invite others to join a live discussion. Live audio has become a standard feature for media platforms similar to having a mobile app 15 years ago.

• Spotify will use Greenroom as a paid engagement tool for musicians and podcast hosts to organize exclusive events, interact with an audience curated by Spotify, and build brand value. The company is also experimenting with live concerts which we imagine could be also watched on Greenroom. As an example, a musician could use Greenroom to invite their super fans to screen a new song or album, or a podcast host to answer questions from premium subscribers.

• Greenroom is a natural fit for Spotify because users already use Spotify exclusively to discover and listen to audio. Greenroom helps plug the two-way communication gap between artists and fans on the app. We the think the addition of Greenroom to Spotify’s monetization toolkit for creators is enormous and well timed.

Spotify press release, June 17, 2021: “As artists, you connect with fans through the music you make, the experiences you create, and the conversations you have with them – whether those interactions happen IRL or virtually. And while posting on social media is a great way to engage fans, you still need a way to talk to them that goes beyond comments and replies. A way that’s more interactive, organic, and engaging in real time…

… Greenroom, a new live audio app from Spotify that allows artists and other creators to connect with fans, followers, and friends in the moment. Going live on Greenroom means conversation spaces that artists can control; when you host a room you’ll have the power to moderate, choose speakers, set the tone and topic of the discussion as well as record the audio….

…Greenroom also gives you the ability to surprise and delight your fans by popping up in their conversations too. (And, since its audio-only, you won’t ever have to worry about being camera ready.) Greenroom provides the opportunity to cultivate a highly-engaged audience of fans who are passionate about artists, the music they make, and the perspectives they have.” The future of audio will be more about the differentiation and effectiveness of the monetization tools supported by different platforms. Creators need to follow consumers wherever they go. Today radio is still Spotify’s biggest competitor, and we think the improvement of streaming audio on other platforms is positive for Spotify.

Daniel Ek, Spotify Q1 2021 Earnings Call: “And while we decided early to go all-in on audio, it’s giving us a head start of more than a decade and unrivaled size and scale. Others are, of course, taking notice. This isn’t surprising at all given the enormous size of the audio market, which some projections indicate could be valued at $200 billion by 2030…

…Competition is nothing new for us. We saw it in music and always expected others to jump on the audio train when they realized how attractive it is to billions of listeners around the world. We believe we have at least 5x to 7x growth left in the business we are today: music, podcasting and paid audio, and we intend to win in those businesses.” 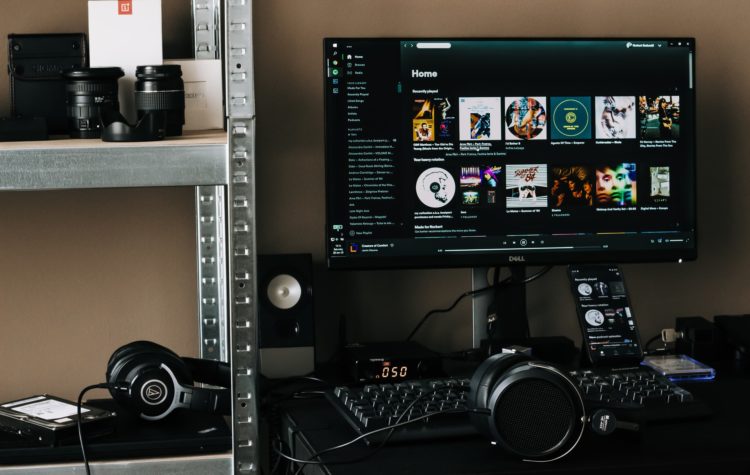 Photo by Norbert Buduczki on Unsplash