The latest 13F reporting period has come and gone, and Insider Monkey is again at the forefront when it comes to making use of this gold mine of data. We have processed the filings of the more than 700 world-class investment firms that we track and now have access to the collective wisdom contained in these filings, which are based on their September 30 holdings, data that is available nowhere else. Should you consider Janus Henderson Group plc (NYSE:JHG) for your portfolio? We’ll look to this invaluable collective wisdom for the answer.

Janus Henderson Group plc (NYSE:JHG) was in 17 hedge funds’ portfolios at the end of the third quarter of 2018. JHG has experienced an increase in support from the world’s most elite money managers lately. There were 13 hedge funds in our database with JHG holdings at the end of the previous quarter. Our calculations also showed that jhg isn’t among the 30 most popular stocks among hedge funds.

What have hedge funds been doing with Janus Henderson Group plc (NYSE:JHG)? 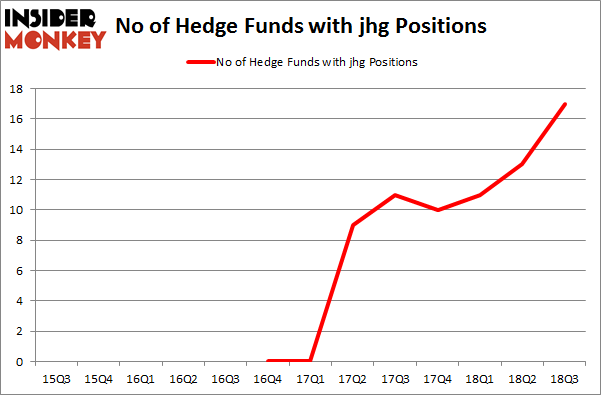 Among these funds, Ariel Investments held the most valuable stake in Janus Henderson Group plc (NYSE:JHG), which was worth $63.9 million at the end of the third quarter. On the second spot was Fisher Asset Management which amassed $41.3 million worth of shares. Moreover, Citadel Investment Group, GAMCO Investors, and AQR Capital Management were also bullish on Janus Henderson Group plc (NYSE:JHG), allocating a large percentage of their portfolios to this stock.

As one would reasonably expect, key money managers were leading the bulls’ herd. LMR Partners, managed by Ben Levine, Andrew Manuel and Stefan Renold, established the biggest position in Janus Henderson Group plc (NYSE:JHG). LMR Partners had $0.6 million invested in the company at the end of the quarter. Peter Rathjens, Bruce Clarke and John Campbell’s Arrowstreet Capital also made a $0.3 million investment in the stock during the quarter. The following funds were also among the new JHG investors: Joel Greenblatt’s Gotham Asset Management and Gavin Saitowitz and Cisco J. del Valle’s Springbok Capital.

As you can see these stocks had an average of 18 hedge funds with bullish positions and the average amount invested in these stocks was $314 million. That figure was $183 million in JHG’s case. Marriott Vacations Worldwide Corporation (NYSE:VAC) is the most popular stock in this table. On the other hand Centrais Elétricas Brasileiras S.A. – Eletrobras (NYSE:EBR) is the least popular one with only 4 bullish hedge fund positions. Janus Henderson Group plc (NYSE:JHG) is not the least popular stock in this group but hedge fund interest is still below average. This is a slightly negative signal and we’d rather spend our time researching stocks that hedge funds are piling on. In this regard VAC might be a better candidate to consider a long position.

Should You Buy The Hanover Insurance Group, Inc. (THG)?
Monthly Newsletter Strategy
Download a free copy of our newsletter and see the details inside!
Hedge Fund Resource Center
Related News
11 Countries With The Worst Modern Music In The World The Top 5 Robo Advisor Apps of 2018 Five Reasons You Need a Day-Trading Mentor
Billionaire Hedge Funds