Based in San Diego, Jack in the Box Inc. (NASDAQ:JACK) is a national casual fast-dining that sells hamburgers, French fries, sandwiches and other meals in 2,200 restaurants covering 21 states. It also owns Qdoba Mexican Grill chain, which comprises around 600 restaurants in 45 states.

With $1.77 billion in market capitalization, the company is currently valued at 24x earnings, well above McDonald’s Corporation (NYSE:MCD). However, unlike McDonald’s, Jack in the Box Inc. (NASDAQ:JACK) in the Box has practically no presence overseas and may not have enough competitive advantages to keep its revenue growing at healthy rates. And with the hamburger market saturated in the U.S., Jack in the Box’s last hope is Qdoba. Unfortunately, even Qdoba’s growth rates may be in danger zone, since it operates in an industry with low barriers to entry and since it has already grown substantially after its acquisition in 2003.

Jack in the Box Inc. (NASDAQ:JACK)’s shares did pretty well in the past 52 weeks (50% return). But because some of the worries mentioned earlier are gaining momentum among investors, in the past 30 days the stock produced negative returns. Will Jack in the Box succumb to fierce competition and market pressure? 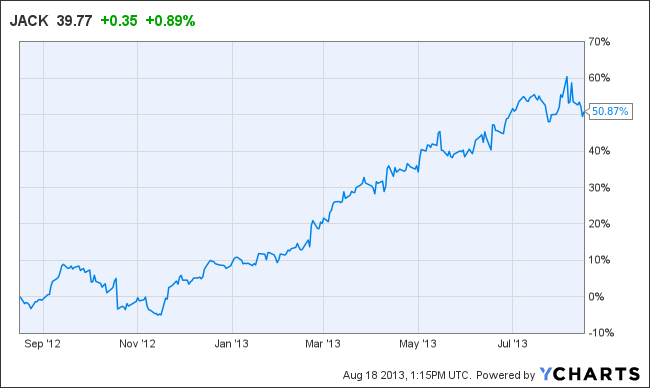 Why Jack in the Box is in trouble

If we take look at the company’s “consolidated franchise revenues” since 2008, at first glance it doesn’t seem like there is a growth problem. Revenue has grown every single year. Indeed, some of the consolidated franchise revenue growth we saw in the past years might have been caused only by the Qdoba business, which since the 2003 acquisition has grown from 85 units in 16 states to more than 550 units in 44 states. The Jack in the Box Inc. (NASDAQ:JACK) hamburger business practically stopped growing in the early 2000’s.

The Qdoba business has been the main revenue growth driver so far. But some signs of market saturation and fierce competition even in this segment suggest it may not be able to sustain the same growth rates in the medium term. An example: the company recently announced its plan to close 67 of its company-owned Qdoba restaurants and refranchise 18 namesake restaurants.

Although the company plans to replace these 67 restaurants with nearly 60-70 new Qdoba restaurants in 2014, there is no guarantee that the new locations will have a positive influence on revenue growth rates. Qdoba may have reached a point where further expansion is simply not that easy.

Of course, closing 67 restaurants also has a negative impact on profitability, especially in the short run. The losses of such discontinued operations were estimated to be $36.7 million. So far this has caused the company to lose $5.7 million in the last quarter, amounting to an overall loss of $0.12 per diluted share, compared with $0.26 in the prior year.

As a matter of fact, net income has decreased considerably each year. Just in the latest quarter the operating margin for Qdoba decreased 270 basis points to 20.6%, as a result of higher food, labor and packaging costs. 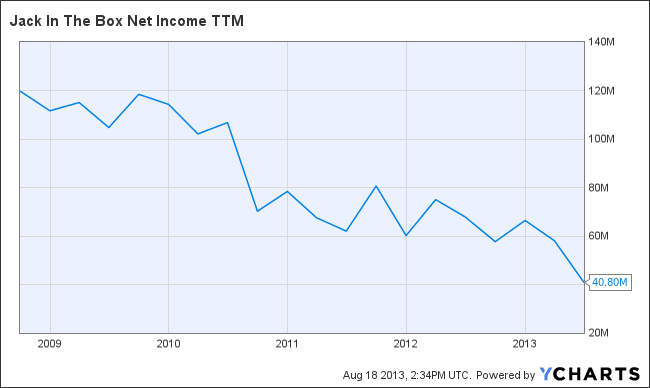 Finally, many investors believe that the process of selling some of its company-owned restaurants to franchisees will increase margins. But the company already pushed its split of company-owned units to franchised units from 62%-38% in 2008, to 24%-76% in 2012. And margins did not increase meaningfully in the same period. Therefore, the main issue here is probably the absence of pricing power and competitive advantages.