Jack in the Box Inc. (JACK): Are Hedge Funds Right About This Stock?

Is Jack in the Box Inc. (NASDAQ:JACK) a good equity to bet on right now? We like to check what the smart money thinks first before doing extensive research. Although there have been several high profile failed hedge fund picks, the consensus picks among hedge fund investors have historically outperformed the market after adjusting for known risk attributes. It’s not surprising given that hedge funds have access to better information and more resources to find the latest market-moving information.

What have hedge funds been doing with Jack in the Box Inc. (NASDAQ:JACK)?

Heading into the fourth quarter of 2018, a total of 26 of the hedge funds tracked by Insider Monkey were bullish on this stock, a change of 18% from the previous quarter. On the other hand, there were a total of 29 hedge funds with a bullish position in JACK at the beginning of this year. With the smart money’s capital changing hands, there exists an “upper tier” of notable hedge fund managers who were adding to their holdings significantly (or already accumulated large positions). 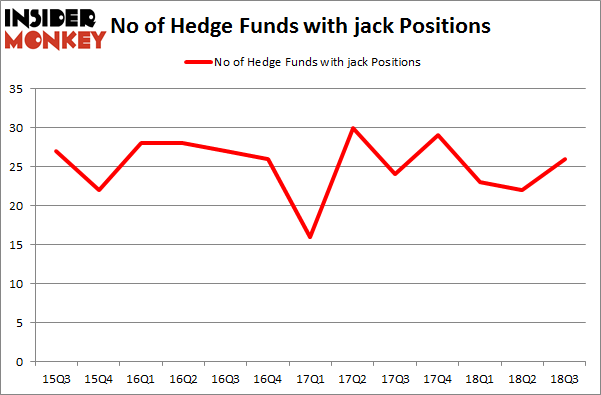 When looking at the institutional investors followed by Insider Monkey, Barry Rosenstein’s JANA Partners has the largest position in Jack in the Box Inc. (NASDAQ:JACK), worth close to $145.5 million, accounting for 4.4% of its total 13F portfolio. The second most bullish fund manager is Israel Englander of Millennium Management, with a $53.7 million position; 0.1% of its 13F portfolio is allocated to the company. Some other members of the smart money that are bullish contain Paul Marshall and Ian Wace’s Marshall Wace LLP, Matthew Knauer and Mina Faltas’s Nokota Management and Michael Doheny’s Freshford Capital Management.

Let’s now take a look at hedge fund activity in other stocks similar to Jack in the Box Inc. (NASDAQ:JACK). We will take a look at Trustmark Corp (NASDAQ:TRMK), Arena Pharmaceuticals, Inc. (NASDAQ:ARNA), B2Gold Corp (NYSEMKT:BTG), and Cambrex Corporation (NYSE:CBM). All of these stocks’ market caps are closest to JACK’s market cap.

As you can see these stocks had an average of 16.75 hedge funds with bullish positions and the average amount invested in these stocks was $139 million. That figure was $480 million in JACK’s case. Arena Pharmaceuticals, Inc. (NASDAQ:ARNA) is the most popular stock in this table. On the other hand Trustmark Corp (NASDAQ:TRMK) is the least popular one with only 11 bullish hedge fund positions. Compared to these stocks Jack in the Box Inc. (NASDAQ:JACK) is more popular among hedge funds. Considering that hedge funds are fond of this stock in relation to its market cap peers, it may be a good idea to analyze it in detail and potentially include it in your portfolio.

Incandescent Capital Gives Its View on Heritage Insurance
Monthly Newsletter Strategy
Download a free copy of our newsletter and see the details inside!
Hedge Fund Resource Center
Related News
Muscle Maker Grill: Fast Casual Chain That Has Lots of Potential Despite Industry Slowdown 32 Major Stories That You Should Read From the World of Finance Today 16 Healthiest Fast Food Menu Items and Restaurants: Should You Invest Healthful? Moe’s vs Chipotle vs Qdoba & Others: Where People Are Eating? The 5 Creepiest Spokesmen Ever: What Were These Companies Thinking? Here is What Hedge Funds Think About Jack in the Box Inc. (JACK) A Closer Look At Tiger Legatus Capital’s Top Moves: AMAYA (AYA), Danaher Corporation (DHR) & Others The 10 Best Islands to Visit in 2019 5 Most Socially Responsible Companies in America 5 Ways You Can Eliminate Credit Card Debt
Billionaire Hedge Funds