Despite these poor results, J.C. Penney Company, Inc. (NYSE:JCP) stock actually gained 6%, and several industry analysts had good things to say about the company’s turnaround. The investment community had already expected another bad quarter, and the stock has dropped more than 70% since its early 2012 high. In many people’s minds, this offset the revenue and earnings misses. 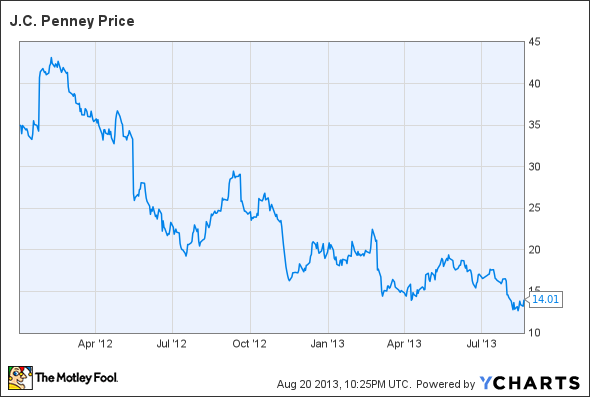 Nevertheless, J.C. Penney Company, Inc. (NYSE:JCP) still looks like a bad investment. In fact, the company’s second-quarter results support the argument I laid out in June, that J.C. Penney is eventually headed for bankruptcy. The company is hemorrhaging cash, and the management team’s attempts to stem the bleeding are likely to be too little, too late.

Burning cash like it’s firewood
During the recently ended second quarter, J.C. Penney Company, Inc. (NYSE:JCP) completed a $2.25 billion term loan arranged by Goldman Sachs Group, Inc. (NYSE:GS), which yielded proceeds of more than $1.8 billion after the company repaid some of its other debt. This financing came just in the nick of time, as J.C. Penney used $708 million in its operations and spent another $439 million on capital expenditures during the quarter.

Over the last six months, J.C. Penney’s debt load has grown by more than $2.5 billion, yet the company’s cash balance has increased by only $657 million. This is perhaps the most dramatic indication of the company’s cash flow problems.

Cash burn should be more moderate in the second half of the year, as the company has already completed the bulk of its capital expenditures and inventory investments for 2013. That said, the company stated that total company liquidity would be “in excess of $1.5 billion” at year-end. Based on the company’s current credit line availability, this means that J.C. Penney Company, Inc. (NYSE:JCP) used another $350 million in cash over the next two quarters, for a total cash burn of more than $2 billion this year.

This performance is clearly unsustainable. J.C. Penney is planning to reduce its capital expenditures to just $300 million next year, down from nearly $1 billion this year. Economizing on capital expenditures will save around $650 million of cash year over year, but that only addresses 30% of the company’s overall cash burn. J.C. Penney will also have to significantly improve its operating results to reach breakeven on a cash basis.

Great expectations
A number of analysts interviewed by the Associated Press were surprisingly upbeat about J.C. Penney Company, Inc. (NYSE:JCP)’s sales and earnings prospects going forward. Most notably, Bernard Sosnick of Gilford Securities expects the company to return to profitability in the fourth quarter and thinks the company could grow sales by 10% to 15% in the first half of 2014.

This scenario — while not impossible — seems highly unlikely. There is certainly an opportunity for improvement over the next 12 months insofar as construction in the stores has disrupted sales over the past 12 months. Without those disruptions, sales trends would have been better. The return to a heavier emphasis on sales and coupons should also help, particularly in the highly promotional holiday period.