What comes to your mind when you think of an iceberg? You might conjure up scenes from the Titanic movie when the “unsinkable” ship collided with an iceberg and was swallowed by the icy waves of the Atlantic. Or, you might think of the desolate, wild frontier of the Arctic or Antarctica.

Whatever you thought of, icebergs illustrate a key principle: oftentimes, there is much more to a story underneath the surface than what is commonly seen. After all, it is estimated that 90% of an iceberg’s total mass is below the water’s surface.

Well, one company has puzzled many an investor with its less-than-stellar reputation “on the surface”: Sears Holdings Corporation (NASDAQ:SHLD). That’s why you might be baffled as to why one of America’s most reviled retailers is enjoying stock price appreciation even as its retail business continues to decay.

I was confused as well, until I dug deeper into the Sears Holdings Corporation (NASDAQ:SHLD) story and found out what lies “below the tip of the iceberg.” While I believe that Sears is at best a dubious investment option and don’t encourage buying Sears’ stock at current prices, Sears provides long-term investors who have an iron stomach with a potentially lucrative investment.

Sears Holdings Corporation (NASDAQ:SHLD) has been struggling in its retail operations for a number of years.  As Michael Santoli of Yahoo! Finance states:

If you can’t fathom why shares of Sears…are up 20% this week and 27% year-to-date, you must be among the multitudes who believe the stock price depends on Sears’ fortunes as a retailer.

No. While the company’s Sears and Kmart stores continue to struggle with declining sales and brutal competition…Sears as a stock has for years been more about financial engineering…

Sears Holdings Corporation (NASDAQ:SHLD) has thus been lambasted by analysts because of its seemingly futile efforts in the retail industry. But what isn’t being accounted for by some is Sears’ potential as a “real estate” business.

Edward Lampert, the current CEO of Sears Holdings Corporation (NASDAQ:SHLD), has quietly crafted an ingenious strategy for his company. Lampert is seeking to capitalize on the real estate assets and brands the company owns while systematically attempting to “draw down” Sears’ retail operations. This key concept was reinforced in much detail by a 139-page report issued by Baker Street Capital Management, “The Case for Sears Holdings (NASDAQ:SHLD),” which values Sears stock at $131 dollars per share. While that figure is hotly contested by some, the prospects for Sears are now more promising put in this new light.

What about J.C. Penney and Berkshire Hathaway?

The topic of Sears’ real estate value might bring another struggling retailer to mind:  J.C. Penney Company, Inc. (NYSE:JCP).  J.C. Penney has also had its share of woes, and thus its share price has been pummeled accordingly. 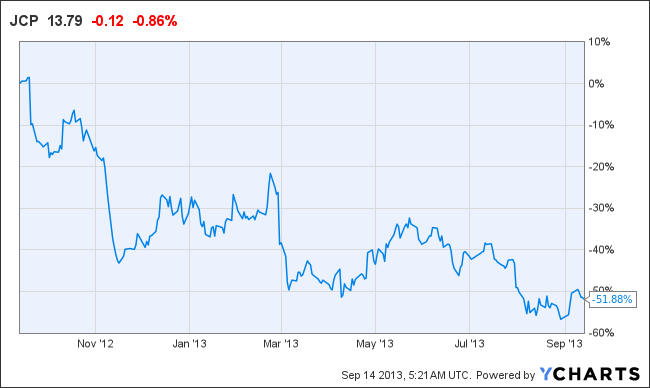 Does J.C. Penney Company, Inc. (NYSE:JCP) have the same potential real estate value to unlock like Sears does? It appears that the answer is, unfortunately for J.C. Penney, “no.”

According to statistics compiled and analyzed by Seeking Alpha author Todd Sullivan, J.C. Penney Company, Inc. (NYSE:JCP)’s real estate value per square foot is significantly below that of Sears. J.C. Penney executives are also showing no signs of trying to pursue a similar strategy to Sears’ CEO Lampert, but rather seem to prefer trying to resuscitate J.C. Penney through the retail route.

That, and the fact that J.C. Penney Company, Inc. (NYSE:JCP) is burning through cash with narrowing options for a rebound, sends signals for me to stay away.

Another bullish talking point has been the idea…that Lampert is a latter-day Warren Buffett, a genius capital allocator intent on using a declining public company as his vehicle for shrewd opportunistic investing for the long term. (Buffett’s Berkshire Hathaway, remember, got its name from a doomed textile manufacturer Buffett took over in the 1960s.)

This talk is at least premature, and possibly misplaced altogether. Yet Lampert has carved up the company in a way that seems to ensure its financial liquidity while maintaining a wide array of options for preserving and increasing eventual investor value — even if the physical retail business is radically shrunk or even wound down.