Being edgy has hurt investors in several stocks over the last year. Edgy can just fall flat or easily become uncomfortably offensive and backfire miserably.

J.C. Penney Company, Inc. (NYSE:JCP), the department store chain, is the poster child for misunderstanding your key customer base when it dropped coupons and sales and alienated customers further dropping some favorite brands as it sought to bring in a youth demographic.

Under new (not really so new, he was CEO before Ron Johnson) Myron Ullman the company issued a public apology for the company’s missteps announcing it was now listening to customers.

Whether that was too little, too late is up for debate. The performance of the stock is not, as it lost 29.48% of its value over the last year. The company had already cut the dividend, laid off employees, and taken on more debt, most recently receiving a $2.25 billion loan from Goldman Sachs. 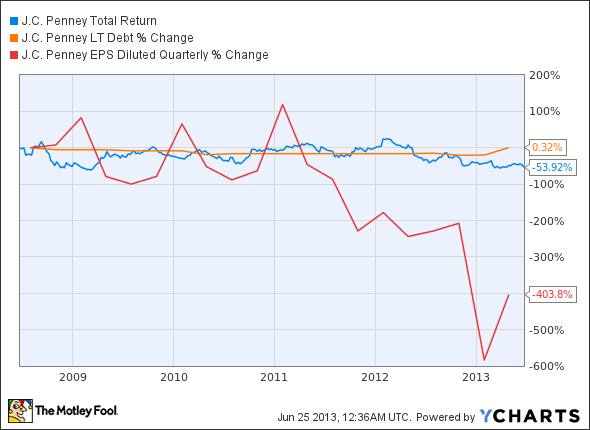 Yes, that is one unhip chart and the company was already in trouble before Ron Johnson’s tenure, subject to the same shopping trends away from the middle-market department store space that have troubled competitor Sears Holdings Corp (NASDAQ:SHLD).

Abercrombie & Fitch Co. (NYSE:ANF) has morphed over the decades from a sporting goods company to a prepster retailer, now aspiring to hipness. In an attempt to be edgy, the company stepped in it again . Popular singer Taylor Swift’s fans deluged their customer service lines in protest after the company offered a T-shirt saying “#more boyfriends than t.s.” Translated: the wearer has more boyfriends than Taylor Swift. The company quickly withdrew the shirt.

This closely followed widespread backlash over exclusionary comments by CEO Michael Jeffries resurfaced about the company’s marketing strategy to attract only the cool and attractive kids and by its lack of larger sizes.

To be fair, Abercrombie & Fitch Co. (NYSE:ANF) has received a perfect 100% score for six years straight on the Human Rights Campaign’s Corporate Equality Index rating corporate policies and practices on workplace equality of LGBT employees. That good news was soon overshadowed by an age discrimination suit filed by Jeffries’ fifty-something pilot The suit brought to light a bizarre 40-page manual for Jeffries’ private Gulfstream staff mandating boxer shorts, flip flops, and Abercrombie & Fitch Co. (NYSE:ANF)cologne, to the required, “No problem,” in answer to all requests.