The Internet has recently been buzzing with rumors of the future of Yahoo! Inc. (NASDAQ:YHOO), after the Sunnyvale, Calif.-based company announced that it was working on “two large acquisitions.”

Under CEO Marissa Mayer, Yahoo has already made four acqui-hires:

These acquisitions are a steady reversal of former CEO Carol Bartz’s decisions to sell services such as Yahoo Shopping, Yahoo Personals, HotJobs, and Zimbra to generate enough capital to stay afloat. Whereas Bartz downsized the company to its core portal site, Mayer is expressing a desire to expand, rebuild and increase Yahoo’s footprint on the web once again.

At this point, investors are probably wondering how Mayer can afford to expand through acquisitions, when her predecessor was so intent on selling off the company piece by piece. We should take a look inside Yahoo! Inc. (NASDAQ:YHOO)’s purse – compared to its top and bottom line growth – to see just how much money it has to spend. 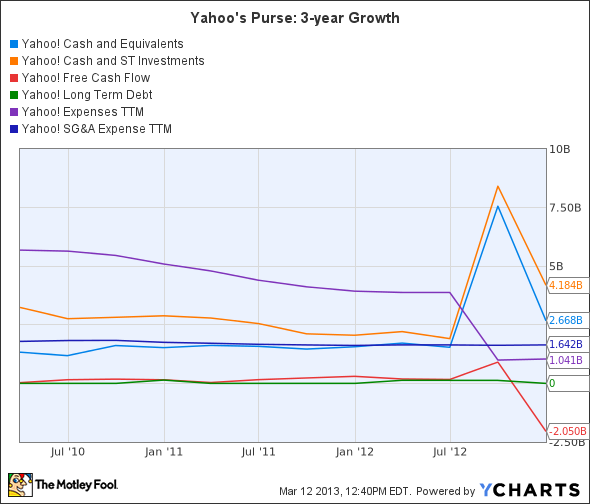 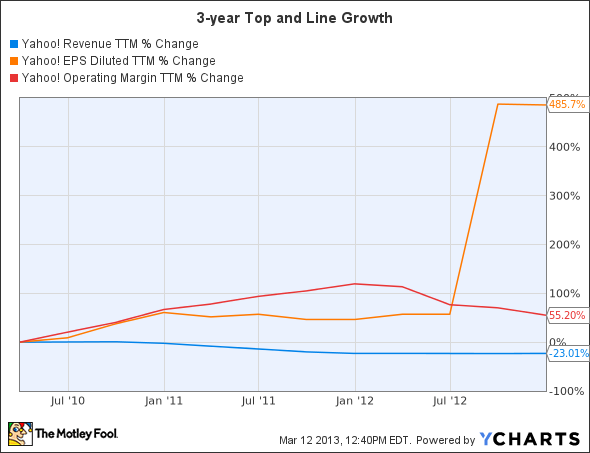 While Yahoo has $4.18 billion in cash and short-term investments to spend immediately on acquisitions, its free cash flow has been declining. However, it only has $37 million in long-term debt, and its expenses have been decreasing – which gives it considerable freedom to spend it cash as it sees fit.

The dawn of the Yahoo ecosystem?

As I mentioned in a previous article, Yahoo’s biggest weakness against Google Inc (NASDAQ:GOOG) is its lack of a cloud-based ecosystem. Mayer was one of the chief architects of Google’s ecosystem, which consists of YouTube, Docs, GMail, Search, Google+ and other services – many of them unified on mobile devices by its Android operating system.

Yahoo also lacks a dedicated browser, such as Google Chrome, to keep users locked into that ecosystem.

In my opinion, Yahoo! Inc. (NASDAQ:YHOO)’s recent acquisitions reflect a desire to rebuild an ecosystem of services that was lost under Bartz’s reign. Although Yahoo may lack the time and resources to create its own mobile operating system or full-featured browser to rival Google, it can brand its recently acquired apps to create a more cohesive Yahoo experience, across both desktop and mobile platforms.

Regarding the larger acquisitions that Reses hinted at, rumors have started to fly that Zynga Inc (NASDAQ:ZNGA) may be next on Mayer’s shopping list.

Before investors start amassing shares of Zynga Inc (NASDAQ:ZNGA) expecting a buyout soon, I’ll have to gleefully burst your bubble – neither Yahoo nor Zynga has officially expressed any interest in the acquisition.

The Zynga-Yahoo buzz originated from a research report from Wunderlich Securities analyst Blake Harper, who stated that Yahoo could consider acquiring Zynga Inc (NASDAQ:ZNGA), if Mayer is considering acquiring companies valued at over $1 billion.