Is Zynga Inc (ZNGA) A Good Stock To Buy?

Hedge funds and large money managers usually invest with a focus on the long-term horizon and, therefore, short-lived dips on the charts, usually don’t make them change their opinion towards a company. This time it may be different. During the first 6 weeks of the fourth quarter we observed increased volatility and small-cap stocks underperformed the market. Hedge fund investor letters indicated that they are cutting their overall exposure, closing out some position and doubling down on others. Let’s take a look at the hedge fund sentiment towards Zynga Inc (NASDAQ:ZNGA) to find out whether it was one of their high conviction long-term ideas.

Is Zynga Inc (NASDAQ:ZNGA) a healthy stock for your portfolio? The smart money is becoming more confident. The number of long hedge fund bets went up by 3 lately. Our calculations also showed that znga isn’t among the 30 most popular stocks among hedge funds.

In the eyes of most investors, hedge funds are seen as slow, old financial vehicles of years past. While there are over 8,000 funds with their doors open at present, We look at the moguls of this club, about 700 funds. These hedge fund managers command most of all hedge funds’ total asset base, and by tracking their top investments, Insider Monkey has unearthed a number of investment strategies that have historically surpassed the S&P 500 index. Insider Monkey’s flagship hedge fund strategy beat the S&P 500 index by 6 percentage points a year since its inception in May 2014 through early November 2018. We were able to generate large returns even by identifying short candidates. Our portfolio of short stocks lost 24% since February 2017 (through December 3rd) even though the market was up nearly 23% during the same period. We just shared a list of 11 short targets in our latest quarterly update.

Heading into the fourth quarter of 2018, a total of 26 of the hedge funds tracked by Insider Monkey held long positions in this stock, a change of 13% from one quarter earlier. Below, you can check out the change in hedge fund sentiment towards ZNGA over the last 13 quarters. With hedge funds’ sentiment swirling, there exists an “upper tier” of notable hedge fund managers who were upping their stakes substantially (or already accumulated large positions). 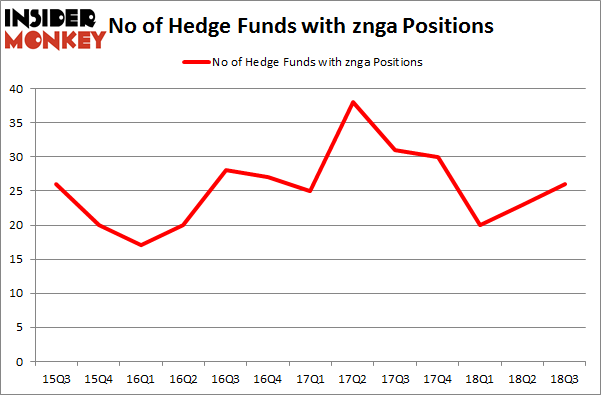 The largest stake in Zynga Inc (NASDAQ:ZNGA) was held by Iridian Asset Management, which reported holding $153.1 million worth of stock at the end of September. It was followed by Cadian Capital with a $109.4 million position. Other investors bullish on the company included D E Shaw, AQR Capital Management, and Black-and-White Capital.

As you can see these stocks had an average of 15.5 hedge funds with bullish positions and the average amount invested in these stocks was $259 million. That figure was $614 million in ZNGA’s case. Blueprint Medicines Corporation (NASDAQ:BPMC) is the most popular stock in this table. On the other hand Compania de Minas Buenaventura SA (NYSE:BVN) is the least popular one with only 4 bullish hedge fund positions. Zynga Inc (NASDAQ:ZNGA) is not the most popular stock in this group but hedge fund interest is still above average. This is a slightly positive signal but we’d rather spend our time researching stocks that hedge funds are piling on. In this regard BPMC might be a better candidate to consider a long position.

Hedge Funds Are Crazy About Orbotech Ltd. (ORBK)
Monthly Newsletter Strategy
Download a free copy of our newsletter and see the details inside!
Hedge Fund Resource Center
Related News
Fitbit, Zynga, Jones Energy, and More: Here’s Why These Stocks Are On The Move 3 Forgotten Tech Stocks That Aren’t Dead Yet Four Penny Stocks Billionaires Are Invested In Pandora Media Inc (P) and Zynga Inc (ZNGA) Among Hedge Funds’ Favorite Penny Stocks 25 Big Companies That Accept Bitcoin, Ethereum and Other Cryptocurrencies 15 Penny Stocks Poised To Explode According To Hedge Funds Wondering What’s Happening in the Financial Markets Today? Check Out These 31 Stories! Five Reasons You Need a Day-Trading Mentor 15 Most Important Medical Discoveries of 2018 The 10 Best Islands to Visit in 2019
Billionaire Hedge Funds