Surviving as an apparel retailer over the past decade hasn’t been easy. Many struggling companies in the industry have yet to fully recover from the blow of the Great Recession, while others have bounced back, soaring to new heights. “Action apparel” retailer Zumiez Inc. (NASDAQ:ZUMZ) – which specializes in skating, snowboarding and surfing apparel and gear – walks a thin line between those two categories.

After plunging from $51.25 to $6.43 per share between October 2007 and March 2009, the company clawed its way back to current levels, and it may still have room to grow. Is Zumiez a budding growth stock in a tough industry, or is investing in it a risky extreme sport of its own?

For its fourth quarter, Lynnwood, Washington-based Zumiez earned $0.74 per diluted share, a 22.1% increase from the prior year quarter – beating expectations by a penny. Revenue also rose 22.1% to $224.4 million, beating the consensus estimate of $223.4 million. Revenue growth notably outpaced inventory growth – a positive sign that products are being sold at a brisk pace.

Zumiez attributed it robust growth to the addition of 56 new stores throughout the fiscal year. However, weak same-store sales dampened the optimism sparked by its top and bottom line growth.

During the fourth quarter, Zumiez’s same-store sales slid 1.0% – a bleak drop from the growth of 8.7% it reported in the prior year quarter. For the full year, same-store sales rose an average of 5.0%.

The company noted that although its total number of paying customers declined, each customer purchased a higher number or products per transaction. The company was also able to raise its prices, which helped it strengthen margins without adversely impacting existing sales volume – meaning that it has pricing power, thanks to its niche market. 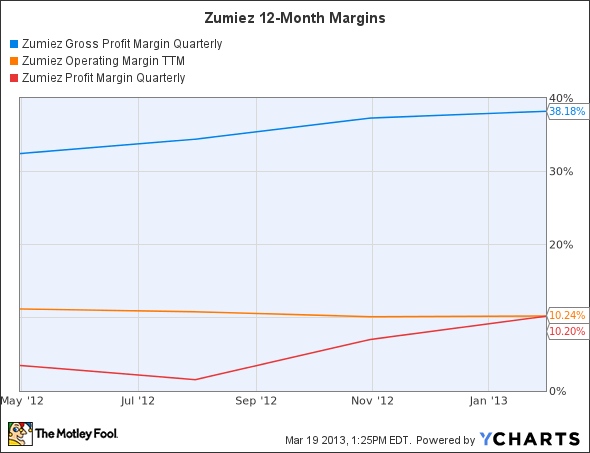 Usually a decline in operating margin points to operational inefficiencies, but Zumiez attributed the dip to an increase in its expenses related to the fulfillment of orders at its Blue Tomato online retailer, the European e-commerce business which it acquired last year for $75 million.

I think Zumiez’s hefty payment for Blue Tomato was justified, considering that the company’s e-commerce segment, including Blue Tomato, posted a sales increase of 22% from the prior year quarter. Total e-commerce sales accounted for 8.3% of annual revenue in fiscal 2012, up from 1.0% five years ago.

Most importantly, without the addition of its e-commerce sales, same-store sales growth for the quarter would have been negative.

Speaking of expenses, Zumiez Inc. (NASDAQ:ZUMZ)’s SG&A (sales, general and administrative) expenses rose 23.4% year-over-year. As a percentage of total revenue, they increased to 22.1% – slightly up from 21.9% last year.

Again, most of these expenses were attributed to web operation costs for Blue Tomato. During the quarter, charges from the Blue Tomato acquisition cost an estimated $7.3 million. An additional $2.1 million was spent on relocating its corporate offices to Lynnwood, and moving its e-commerce fulfillment center to Edwardsville, Kansas.

However, most of these costs were offset by lower fixed costs, such as a slight decline in occupancy costs for its brick and mortar business. 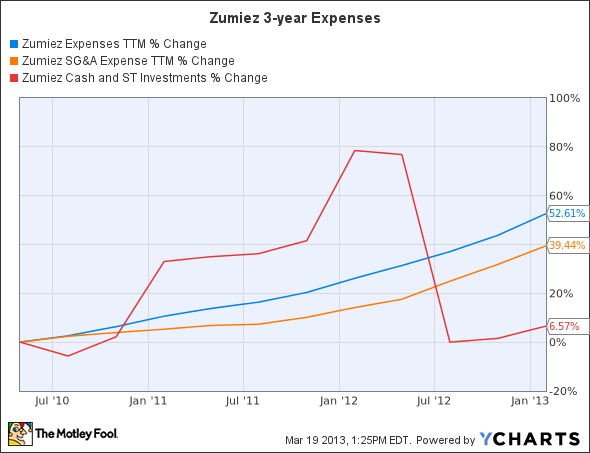 But a look back at the past three years reveals that Zumiez’s rising expenses are a continuation of a longer-term trend, which is worrisome due to its decreased cash and short term investments position. At the end of the fourth quarter, Zumiez’s cash position plunged 40.3% from $172.8 million to $103.2 million, as a result of Blue Tomato, increased capital expenditures and stock repurchases.

Zumiez Inc. (NASDAQ:ZUMZ) bought back 1.3 million shares of stock for approximately $25.8 million. I firmly believe that the company could have scaled back on stock buybacks to beef up its cash reserves. However, its free cash flow remained at a healthy $66.2 million, which means that its cash won’t dry up anytime soon.