Is Yahoo! Inc. (YHOO) Worth More Than the Sum of Its Parts?

Stop me if you’ve heard this before. A high-flying online company, suddenly flush with cash, goes on a buying spree to make itself “relevant” beyond its already-large core user base. Years later, the acquisitions turn out to be only so much wasted money, and the company has to admit that it simply hasn’t bought needed growth in a fiercely competitive connected world. This isn’t yet Yahoo! Inc. (NASDAQ:YHOO)‘s fate — it’s far too early to tell — but, based on the ample history of Internet-company acquisitions, it seems more likely than not to expect its recent moves to prove more trouble (and more money) than they’re worth.

But does that mean Yahoo! stock isn’t worth your time today? It might be — if you know where to look.

A history of bad decisions
It’s not hard to find examples of Yahoo! Inc. (NASDAQ:YHOO)’s poor acquisitive decision-making. Heck, there’s a whole Wikipedia page devoted to the company’s buyouts. Here are some of the more egregious examples:

These are just some of the more well-known early failures. Broadcast.com, GeoCities, Hotjobs, Inktomi, and Musicmatch are all effectively dead now, having been shut down, resold, or otherwise disposed of. Flickr and del.ici.ous are both also-rans in their categories — the image-hosting category has a tremendous array of options that are led at the moment by Facebook Inc (NASDAQ:FB)‘s Instagram, and by Pinterest, and del.ici.ous was only a proto-Reddit, which is like saying that Yahoo! Inc. (NASDAQ:YHOO) is a proto-Google Inc (NASDAQ:GOOG). It’s just not at the same level, and isn’t likely to ever be.

This might not seem fair to Yahoo!, which didn’t have superstar ex-Google executive Marissa Mayer to head it up during its old buying sprees. But the online world is littered with bad acquisitions made by companies blessed with more cash than common sense. AOL, Inc. (NYSE:AOL) blew through billions upon billions during its heyday, acquiring Mapquest and Netscape before merging with Time Warner Cable Inc (NYSE:TWC) in a truly disastrous wreck of shareholder value. Microsoft Corporation (NASDAQ:MSFT) wrote off all of its multibillion-dollar purchase of aQuantive, which was meant to place it on better footing with Google in search ads. Even News Corp (NASDAQ:NWS) got in on the silliness when it bought Myspace for over $500 million. Companies that have tried to buy their way into new online media service markets (or just into greater market share) have fallen on their faces again and again and again.

So what’s different at Yahoo! Inc. (NASDAQ:YHOO)? Well, so far in Mayer’s tenure, there have been 11 acquisitions. Yahoo! made some waves with its $30 million acquisition of Summly, which uses technology built by the company behind Apple Inc. (NASDAQ:AAPL)‘s Siri to summarize news articles. Summly is now referred to as “Yahoo!’s Siri,” which is somewhat ignominious considering the decidedly underwhelming impact that Siri has actually had on the Apple user experience. Summly itself was barely used before its acquisition, which was, in part, designed to bring its 17-year-old British founder (who built neither the app nor the underlying technology himself ) onboard as “talent” … after he finishes high school. It’s a strange acquisition, but maybe its big Tumblr buyout will make a bit more sense on the bottom line.

But why would it? Tumblr is a blog platform — the 2013 equivalent of GeoCities, where everyone with an opinion or a desire to overshare can broadcast his or her intimate thoughts to a largely indifferent world. Mayer can promise not to screw it up all she likes, but the sad fact is that the half-life of personal sharing platforms is remarkably short. Tumblr’s monetization strategy is unclear and uncertain — more ads would likely alienate users who feel like their Tumblr pages are “personal,” and charging brands to use the site is just as likely to see many brand strategists switch to one of many alternative blogging platforms.

Is it worth buying the second banana?
Tumblr is not the sum of Yahoo! Inc. (NASDAQ:YHOO)’s potential, and it’s not fair to focus solely on that aspect of a wide-ranging online content purveyor. But when you look at the numbers on hand, there’s really not much reason to get excited about Yahoo! stock today: 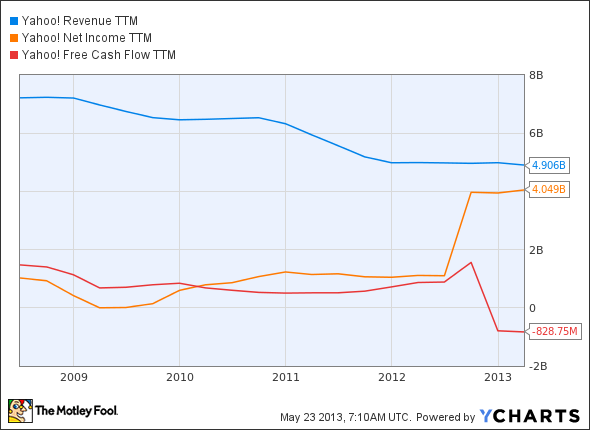 Faithful Yahoo! watchers know that the big bump in net income came from Yahoo!’s sale of part of its Alibaba stake last year, which gave the company the war chest it used to go out and make all those recent acquisitions. Yet, Yahoo! Inc. (NASDAQ:YHOO) wound up getting little net benefit from that sale; as you can see in the company’s free cash flow line — nearly all of the after-tax gain from the Alibaba sale ($3.65 billion) flowed back to shareholders, primarily through share repurchases.

If you remove the sale from Yahoo!’s bottom line (while also adjusting for the additional taxes incurred as a result), the company only made a hair over $1.1 billion for the trailing 12 months, roughly on par with 2011’s result, and a bit below 2010’s. With that adjusted figure, Yahoo!’s normalized P/E is closer to 25, which isn’t exactly cheap for a company that’s seen revenue shrink by 32% in the last five years.

And why exactly has Yahoo! Inc. (NASDAQ:YHOO)’s revenue fallen so much? Primarily because Yahoo! is a perennial second-place service that’s been unable to fend off market-share erosion. Traffic analytics sites Alexa and Quantcast both show a decline of user share — in global percentages and in raw visitor totals — over the past year. Display advertising, Yahoo!’s big moneymaker, fell by 11% in the latest quarter. As far back as 2010, Yahoo! executives recognized Facebook as a greater potential competitor than Google — Yahoo! has not been a contending search engine almost since Google’s first year of operation, and it lacks the social stickiness to fend off a serious Facebook foray into content distribution. Yahoo!’s answer to the social problem appears to be Tumblr, which makes no sense as it’s currently constituted, since Tumblr is largely anonymous, and very far distant to Facebook in mind share. Years of being Google’s search second banana should have taught Yahoo! that being second-best isn’t often a strategy for long-term success in online services.

The sum of the parts
These numbers, however, don’t tell the full story. Yahoo! Inc. (NASDAQ:YHOO) still owns a chunk of two other companies: It still holds 20% of Alibaba, and also owns 35% of Yahoo! Japan, which is trading at a market cap of $28.5 billion on over-the-counter exchanges, or $27.4 billion on the Tokyo exchange, which would be a more accurate number.