Is Xunlei Ltd (XNET) A Good Stock To Buy?

It seems that the masses and most of the financial media hate hedge funds and what they do, but why is this hatred of hedge funds so prominent? At the end of the day, these asset management firms do not gamble the hard-earned money of the people who are on the edge of poverty. Truth be told, most hedge fund managers and other smaller players within this industry are very smart and skilled investors. Of course, they may also make wrong bets in some instances, but no one knows what the future holds and how market participants will react to the bountiful news that floods in each day. The S&P 500 Index gained 7.6% in the 12 month-period that ended November 21, while less than 49% of its stocks beat the benchmark. In contrast, the 30 most popular mid-cap stocks among the top hedge fund investors tracked by the Insider Monkey team returned 18% over the same period, which provides evidence that these money managers do have great stock picking abilities. That’s why we believe it isn’t a waste of time to check out hedge fund sentiment before you invest in a stock like Xunlei Ltd (NASDAQ:XNET) .

Is Xunlei Ltd (NASDAQ:XNET) a great investment today? Money managers are categorically actually turning less bullish. The number of bullish hedge fund investments fell by 2 in recent months. XNET was in 7 hedge funds’ portfolios at the end of September. There were 9 hedge funds in our database with XNET positions at the end of the previous quarter. At the end of this article we will also compare XNET to other stocks including KVH Industries, Inc. (NASDAQ:KVHI), Genocea Biosciences Inc (NASDAQ:GNCA), and Genie Energy Ltd (NYSE:GNE) to get a better sense of its popularity.

With all of this in mind, we’re going to review the fresh action surrounding Xunlei Ltd (NASDAQ:XNET).

What have hedge funds been doing with Xunlei Ltd (NASDAQ:XNET)?

At the end of the third quarter, a total of 7 of the hedge funds tracked by Insider Monkey were bullish on this stock, a change of -22% from the previous quarter. On the other hand, there were a total of 5 hedge funds with a bullish position in XNET at the beginning of this year. With the smart money’s sentiment swirling, there exists an “upper tier” of noteworthy hedge fund managers who were boosting their stakes significantly (or already accumulated large positions). 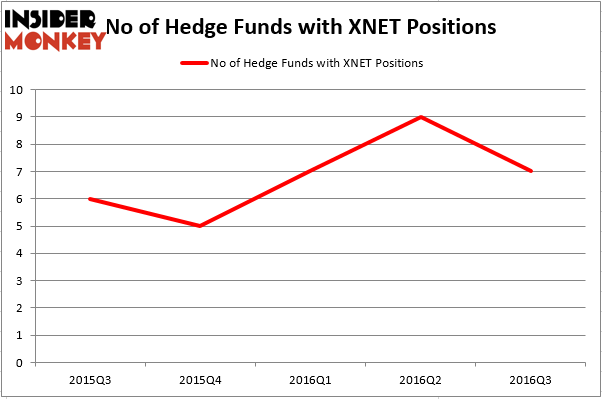 According to publicly available hedge fund and institutional investor holdings data compiled by Insider Monkey, Hillhouse Capital Management, led by Lei Zhang, holds the number one position in Xunlei Ltd (NASDAQ:XNET). Hillhouse Capital Management has a $2.2 million position in the stock, comprising less than 0.1%% of its 13F portfolio. On Hillhouse Capital Management’s heels is Renaissance Technologies, one of the biggest hedge funds in the world, holding a $1.7 million position; the fund has less than 0.1%% of its 13F portfolio invested in the stock. Some other peers that are bullish contain Ben Levine, Andrew Manuel and Stefan Renold’s LMR Partners, D. E. Shaw’s D E Shaw and John Overdeck and David Siegel’s Two Sigma Advisors. We should note that none of these hedge funds are among our list of the 100 best performing hedge funds which is based on the performance of their 13F long positions in non-microcap stocks.

Seeing as Xunlei Ltd (NASDAQ:XNET) has encountered a decline in interest from the smart money, it’s safe to say that there was a specific group of fund managers who sold off their entire stakes heading into Q4. Interestingly, Brian Taylor’s Pine River Capital Management dumped the biggest position of the 700 funds followed by Insider Monkey, worth an estimated $0.6 million in stock, and Matthew Tewksbury’s Stevens Capital Management was right behind this move, as the fund said goodbye to about $0.1 million worth of shares.

As you can see these stocks had an average of 5.25 hedge funds with bullish positions and the average amount invested in these stocks was $9 million. That figure was $6 million in XNET’s case. KVH Industries, Inc. (NASDAQ:KVHI) is the most popular stock in this table. On the other hand Willdan Group, Inc. (NASDAQ:WLDN) is the least popular one with only 4 bullish hedge fund positions. Compared to these stocks Xunlei Ltd (NASDAQ:XNET) is more popular among hedge funds. Considering that hedge funds are fond of this stock in relation to its market cap peers, it may be a good idea to analyze it in detail and potentially include it in your portfolio.

Is Oncobiologics Inc (ONS) A Good Stock To Buy According To Hedge Funds?
Monthly Newsletter Strategy
Download a free copy of our newsletter and see the details inside!
Hedge Fund Resource Center
Related News
15 Best Selling Video Games of All Time 10 Biggest Data Breaches of All Time 8 Smartphones With The Best Battery Life In 2017
Billionaire Hedge Funds