Is Xerox Corporation (XRX) A Good Stock To Buy?

Insider Monkey has processed numerous 13F filings of hedge funds and famous investors to create an extensive database of hedge fund holdings. The 13F filings show the hedge funds and investors’ positions as of the end of the third quarter. You can find write-ups about an individual hedge fund’s trades on numerous financial news websites. However, in this article we will take a look at their collective moves and analyze what the smart money thinks of Xerox Corporation (NYSE:XRX) based on that data.

Xerox Corporation (NYSE:XRX) shares haven’t seen a lot of action during the third quarter. Overall, hedge fund sentiment was unchanged. The stock was in 37 hedge funds’ portfolios at the end of September. At the end of this article we will also compare XRX to other stocks including Caesars Entertainment Corp (NASDAQ:CZR), China Southern Airlines Co Ltd (NYSE:ZNH), and Bright Horizons Family Solutions Inc (NYSE:BFAM) to get a better sense of its popularity.

To most stock holders, hedge funds are perceived as worthless, old investment vehicles of years past. While there are greater than 8,000 funds with their doors open at present, Our researchers hone in on the upper echelon of this group, around 700 funds. These money managers watch over the majority of the hedge fund industry’s total asset base, and by following their highest performing equity investments, Insider Monkey has uncovered a few investment strategies that have historically outperformed Mr. Market. Insider Monkey’s flagship hedge fund strategy beat the S&P 500 index by 6 percentage points a year since its inception in May 2014 through early November 2018. We were able to generate large returns even by identifying short candidates. Our portfolio of short stocks lost 24% since February 2017 (through December 3rd) even though the market was up nearly 23% during the same period. We just shared a list of 11 short targets in our latest quarterly update.

We’re going to take a look at the latest hedge fund action regarding Xerox Corporation (NYSE:XRX).

At the end of the third quarter, a total of 37 of the hedge funds tracked by Insider Monkey held long positions in this stock, a change of 0% from the second quarter of 2018. The graph below displays the number of hedge funds with bullish position in XRX over the last 13 quarters. With the smart money’s sentiment swirling, there exists a select group of key hedge fund managers who were upping their stakes considerably (or already accumulated large positions). 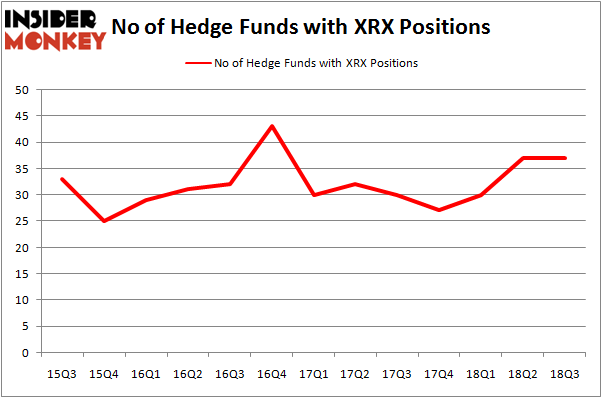 Of the funds tracked by Insider Monkey, Carl Icahn’s Icahn Capital LP has the largest position in Xerox Corporation (NYSE:XRX), worth close to $632.8 million, accounting for 2.5% of its total 13F portfolio. The second largest stake is held by Ken Griffin of Citadel Investment Group, with a $153 million position; 0.1% of its 13F portfolio is allocated to the company. Other hedge funds and institutional investors that hold long positions encompass Kenneth Mario Garschina’s Mason Capital Management, Matthew Sidman’s Three Bays Capital and Manoneet Singh’s Kavi Asset Management.

Due to the fact that Xerox Corporation (NYSE:XRX) has faced a decline in interest from the entirety of the hedge funds we track, it’s safe to say that there is a sect of hedgies who were dropping their positions entirely by the end of the third quarter. Interestingly, Anand Parekh’s Alyeska Investment Group dumped the largest investment of the 700 funds watched by Insider Monkey, comprising close to $57.8 million in stock, and Curtis Macnguyen’s Ivory Capital (Investment Mgmt) was right behind this move, as the fund dumped about $18.4 million worth. These bearish behaviors are interesting, as aggregate hedge fund interest stayed the same (this is a bearish signal in our experience).

As you can see these stocks had an average of 29.25 hedge funds with bullish positions and the average amount invested in these stocks was $1.61 billion. That figure was $1.22 billion in XRX’s case. Caesars Entertainment Corp (NASDAQ:CZR) is the most popular stock in this table. On the other hand China Southern Airlines Co Ltd (NYSE:ZNH) is the least popular one with only 5 bullish hedge fund positions. Xerox Corporation (NYSE:XRX) is not the most popular stock in this group but hedge fund interest is still above average. This is a slightly positive signal but we’d rather spend our time researching stocks that hedge funds are piling on. In this regard CZR might be a better candidate to consider a long position.