Hedge funds are not perfect. They have their bad picks just like everyone else. Facebook, a stock hedge funds have loved, lost a third of its value since the end of July. Although hedge funds are not perfect, their consensus picks do deliver solid returns, however. Our data show the top 30 S&P 500 stocks among hedge funds at the end of September 2018 yielded an average return of 6.7% year-to-date, vs. a gain of 2.6% for the S&P 500 Index. Because hedge funds have a lot of resources and their consensus picks do well, we pay attention to what they think. In this article, we analyze what the elite funds think of World Fuel Services Corporation (NYSE:INT).

Hedge fund interest in World Fuel Services Corporation (NYSE:INT) shares was flat at the end of last quarter. This is usually a negative indicator. At the end of this article we will also compare INT to other stocks including Atara Biotherapeutics Inc (NASDAQ:ATRA), Camping World Holdings, Inc. (NYSE:CWH), and FBL Financial Group, Inc. (NYSE:FFG) to get a better sense of its popularity.

How have hedgies been trading World Fuel Services Corporation (NYSE:INT)?

At Q3’s end, a total of 13 of the hedge funds tracked by Insider Monkey were bullish on this stock, no change from the previous quarter. On the other hand, there were a total of 16 hedge funds with a bullish position in INT at the beginning of this year. With hedge funds’ positions undergoing their usual ebb and flow, there exists an “upper tier” of notable hedge fund managers who were increasing their holdings significantly (or already accumulated large positions). 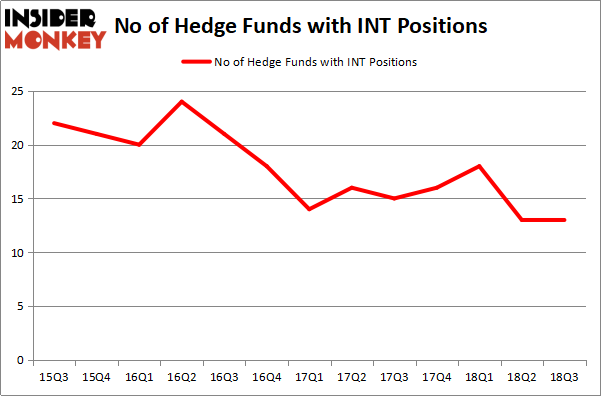 Among these funds, AQR Capital Management held the most valuable stake in World Fuel Services Corporation (NYSE:INT), which was worth $35.4 million at the end of the third quarter. On the second spot was D E Shaw which amassed $18.3 million worth of shares. Moreover, Citadel Investment Group, Two Sigma Advisors, and Royce & Associates were also bullish on World Fuel Services Corporation (NYSE:INT), allocating a large percentage of their portfolios to this stock.

Judging by the fact that World Fuel Services Corporation (NYSE:INT) has faced a decline in interest from hedge fund managers, we can see that there were a few fund managers who sold off their positions entirely by the end of the third quarter. It’s worth mentioning that Glenn Russell Dubin’s Highbridge Capital Management dumped the largest investment of the 700 funds monitored by Insider Monkey, worth an estimated $4.3 million in stock. Matthew Hulsizer’s fund, PEAK6 Capital Management, also sold off its stock, about $0.3 million worth. These moves are intriguing to say the least, as total hedge fund interest stayed the same (this is a bearish signal in our experience).

As you can see these stocks had an average of 11.25 hedge funds with bullish positions and the average amount invested in these stocks was $218 million. That figure was $88 million in INT’s case. Camping World Holdings, Inc. (NYSE:CWH) is the most popular stock in this table. On the other hand FBL Financial Group, Inc. (NYSE:FFG) is the least popular one with only 4 bullish hedge fund positions. World Fuel Services Corporation (NYSE:INT) is not the most popular stock in this group but hedge fund interest is still above average. This is a slightly positive signal but we’d rather spend our time researching stocks that hedge funds are piling on. In this regard CWH might be a better candidate to consider a long position.