Insider Monkey has processed numerous 13F filings of hedge funds and successful investors to create an extensive database of hedge fund holdings. The 13F filings show the hedge funds’ and successful investors’ positions as of the end of the first quarter. You can find write-ups about an individual hedge fund’s trades on numerous financial news websites. However, in this article we will take a look at their collective moves and analyze what the smart money thinks of Williams-Sonoma, Inc. (NYSE:WSM) based on that data.

Williams-Sonoma, Inc. (NYSE:WSM) shareholders have witnessed an increase in hedge fund interest recently. Our calculations also showed that wsm isn’t among the 30 most popular stocks among hedge funds. 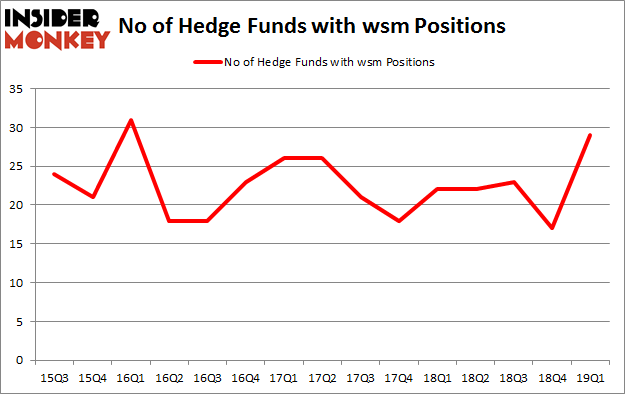 More specifically, AQR Capital Management was the largest shareholder of Williams-Sonoma, Inc. (NYSE:WSM), with a stake worth $93 million reported as of the end of March. Trailing AQR Capital Management was Select Equity Group, which amassed a stake valued at $91.7 million. Millennium Management, Arrowstreet Capital, and D E Shaw were also very fond of the stock, giving the stock large weights in their portfolios.

Consequently, some big names have jumped into Williams-Sonoma, Inc. (NYSE:WSM) headfirst. Millennium Management, managed by Israel Englander, created the biggest position in Williams-Sonoma, Inc. (NYSE:WSM). Millennium Management had $36.8 million invested in the company at the end of the quarter. Peter Rathjens, Bruce Clarke and John Campbell’s Arrowstreet Capital also made a $24.2 million investment in the stock during the quarter. The other funds with new positions in the stock are Jim Simons’s Renaissance Technologies, David Harding’s Winton Capital Management, and Paul Tudor Jones’s Tudor Investment Corp.