Is Westpac Banking Corporation (WBK) A Good Stock To Buy?

“Market conditions are changing. The continued rise in interest rates suggests we are in the early stages of a bond bear market, which could intensify as central banks withdraw liquidity. The receding tide of liquidity will start to reveal more rocks beyond what has been exposed in emerging markets so far, and the value of a value discipline will be in avoiding the biggest capital-destroying rocks. If a rock emerges on the crowded shore of U.S. momentum, it could result in a major liquidity challenge, as momentum is often most intense on the downside as a crowded trade reverses. So investors are facing a large potential trade-off right now: continue to bet on the current dominance of momentum and the S&P 500, or bet on change and take an active value bet in names with attractive value and optionality, but with negative momentum,” said Clearbridge Investments in its market commentary. We aren’t sure whether long-term interest rates will top 5% and value stocks outperform growth, but we follow hedge fund investor letters to understand where the markets and stocks might be going. This article will lay out and discuss the hedge fund and institutional investor sentiment towards Westpac Banking Corporation (NYSE:WBK).

Is Westpac Banking Corporation (NYSE:WBK) undervalued? Hedge funds are becoming less hopeful. The number of bullish hedge fund positions decreased by 1 in recent months. Our calculations also showed that WBK isn’t among the 30 most popular stocks among hedge funds.

In today’s marketplace there are tons of metrics market participants can use to grade their holdings. Some of the most under-the-radar metrics are hedge fund and insider trading activity. Our researchers have shown that, historically, those who follow the best picks of the top hedge fund managers can outperform the S&P 500 by a solid amount (see the details here).

How have hedgies been trading Westpac Banking Corporation (NYSE:WBK)?

Heading into the fourth quarter of 2018, a total of 6 of the hedge funds tracked by Insider Monkey held long positions in this stock, a change of -14% from the previous quarter. By comparison, 5 hedge funds held shares or bullish call options in WBK heading into this year. With the smart money’s positions undergoing their usual ebb and flow, there exists a few noteworthy hedge fund managers who were adding to their holdings meaningfully (or already accumulated large positions). 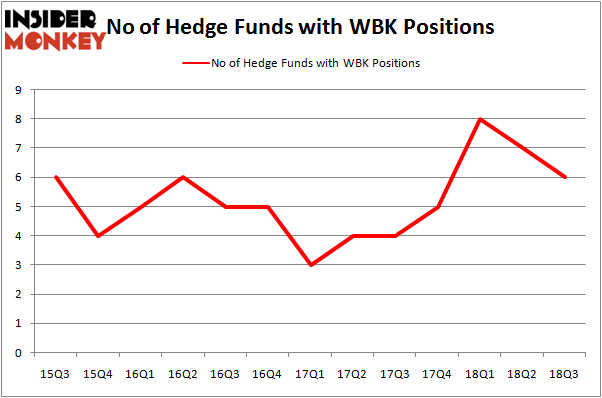 The largest stake in Westpac Banking Corporation (NYSE:WBK) was held by Renaissance Technologies, which reported holding $25.2 million worth of stock at the end of September. It was followed by LMR Partners with a $13.1 million position. Other investors bullish on the company included D E Shaw, Arrowstreet Capital, and Fisher Asset Management.

Because Westpac Banking Corporation (NYSE:WBK) has witnessed a decline in interest from the entirety of the hedge funds we track, it’s easy to see that there was a specific group of funds that slashed their full holdings by the end of the third quarter. Interestingly, Israel Englander’s Millennium Management said goodbye to the biggest stake of the 700 funds tracked by Insider Monkey, totaling about $0.5 million in stock. John Overdeck and David Siegel’s fund, Two Sigma Advisors, also sold off its stock, about $0.4 million worth. These bearish behaviors are interesting, as total hedge fund interest was cut by 1 funds by the end of the third quarter.

As you can see these stocks had an average of 53.25 hedge funds with bullish positions and the average amount invested in these stocks was $8.81 billion. That figure was $42 million in WBK’s case. Aetna Inc. (NYSE:AET) is the most popular stock in this table. On the other hand The Kraft Heinz Company (NASDAQ:KHC) is the least popular one with only 37 bullish hedge fund positions. Compared to these stocks Westpac Banking Corporation (NYSE:WBK) is even less popular than KHC. Considering that hedge funds aren’t fond of this stock in relation to other companies analyzed in this article, it may be a good idea to analyze it in detail and understand why the smart money isn’t behind this stock. This isn’t necessarily bad news. Although it is possible that hedge funds may think the stock is overpriced and view the stock as a short candidate, they may not be very familiar with the bullish thesis. In either case more research is warranted.