Is Western Digital Corp. (WDC) A Good Stock To Buy?

We at Insider Monkey have gone over 700 13F filings that hedge funds and prominent investors are required to file by the SEC. The 13F filings show the funds’ and investors’ portfolio positions as of September 30th. In this article, we look at what those funds think of Western Digital Corp. (NASDAQ:WDC) based on that data.

Western Digital Corp. (NASDAQ:WDC) has seen a large decrease in enthusiasm from smart money recently, being one of 10 Stocks Hedge Funds Ditched in Q3 Just Before the Market Crushed Them. At the end of the third quarter, the company was in 33 hedge funds’ portfolios, down from 43 in the previous quarter. Not only did the company lose 10 smart money investors during the third quarter, the number of those who stayed long was far from enough for the company to be included among the 30 most popular stocks among hedge funds.

“Western Digital’s stock price was down 23.73% in the third quarter of 2018 and was the largest detractor of performance for the Fund this quarter. Whenever we see such a big move, we like to take a step back and reevaluate our investment thesis. As part of that process, we seek a deep understanding of the bear case, such that we can articulate the bear case even better than the bears can – a process known as ‘straw manning. If we truly understand the bear case and can pose cogent arguments against its core points, we think this presents a good long-term investment opportunity.”

This is what FPA Capital Fund stated about the company in its Third Quarter Report.

How have hedgies been trading Western Digital Corp. (NASDAQ:WDC)?

At Q3’s end, a total of 33 of the hedge funds tracked by Insider Monkey were bullish on this stock, a drop of 23% from the second quarter of 2018. The graph below displays the number of hedge funds with bullish position in WDC over the last 13 quarters. With hedge funds’ sentiment swirling, there exists an “upper tier” of notable hedge fund managers who were increasing their holdings substantially (or already accumulated large positions). 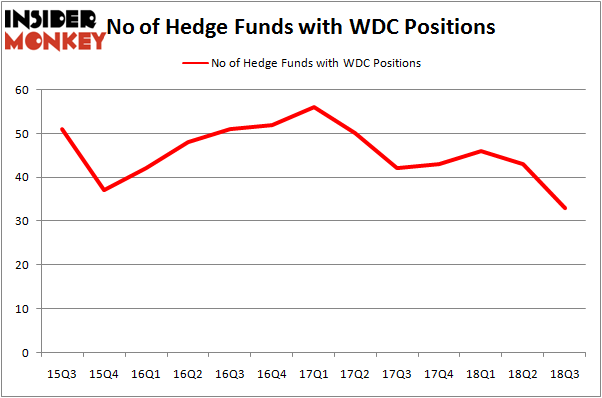 Among these funds, Iridian Asset Management held the most valuable stake in Western Digital Corp. (NASDAQ:WDC), which was worth $367.9 million at the end of the third quarter. On the second spot was AQR Capital Management which amassed $364.2 million worth of shares. Moreover, Citadel Investment Group, D E Shaw, and Renaissance Technologies were also bullish on Western Digital Corp. (NASDAQ:WDC), allocating a large percentage of their portfolios to this stock.

Since Western Digital Corp. (NASDAQ:WDC) has witnessed falling interest from the smart money, logic holds that there exists a select few hedgies that decided to sell off their entire stakes in the third quarter. Interestingly, David Tepper’s Appaloosa Management LP dumped the biggest stake of all the hedgies monitored by Insider Monkey, comprising an estimated $85.1 million in stock. Anand Parekh’s fund, Alyeska Investment Group, also dumped its stock, about $80.1 million worth. These moves are important to note, as aggregate hedge fund interest fell by 10 funds in the third quarter.

As you can see these stocks had an average of 27 hedge funds with bullish positions and the average amount invested in these stocks was $839 million. That figure was $1.21 billion in WDC’s case. DISH Network Corp. (NASDAQ:DISH) is the most popular stock in this table. On the other hand Korea Electric Power Corporation (NYSE:KEP) is the least popular one with only 4 bullish hedge fund positions. Western Digital Corp. (NASDAQ:WDC) is not the most popular stock in this group but hedge fund interest is still above average. This is a slightly positive signal but we’d rather spend our time researching stocks that hedge funds are piling on. In this regard DISH might be a better candidate to consider a long position.