A whopping number of 13F filings filed with U.S. Securities and Exchange Commission has been processed by Insider Monkey so that individual investors can look at the overall hedge fund sentiment towards the stocks included in their watchlists. These freshly-submitted public filings disclose money managers’ equity positions as of the end of the three-month period that ended March 31, so let’s proceed with the discussion of the hedge fund sentiment on WEC Energy Group, Inc. (NYSE:WEC).

Is WEC Energy Group, Inc. (NYSE:WEC) going to take off soon? The best stock pickers are turning bullish. The number of bullish hedge fund bets increased by 2 recently. Our calculations also showed that WEC isn’t among the 30 most popular stocks among hedge funds. WEC was in 15 hedge funds’ portfolios at the end of March. There were 13 hedge funds in our database with WEC positions at the end of the previous quarter.

In today’s marketplace there are numerous gauges stock market investors have at their disposal to size up publicly traded companies. Two of the less utilized gauges are hedge fund and insider trading activity. Our researchers have shown that, historically, those who follow the best picks of the top hedge fund managers can beat the market by a significant amount (see the details here). 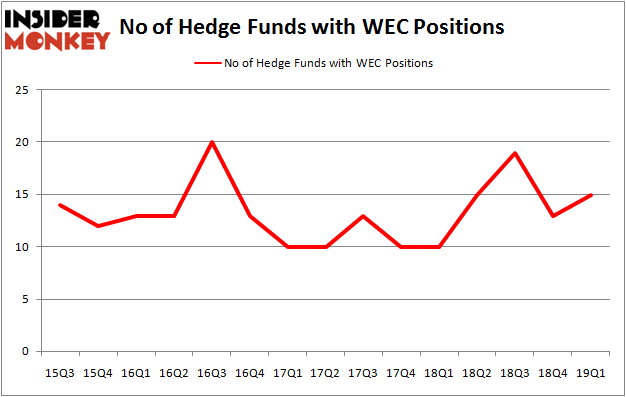 Among these funds, Renaissance Technologies held the most valuable stake in WEC Energy Group, Inc. (NYSE:WEC), which was worth $323.7 million at the end of the first quarter. On the second spot was AQR Capital Management which amassed $56.7 million worth of shares. Moreover, GLG Partners, Citadel Investment Group, and Millennium Management were also bullish on WEC Energy Group, Inc. (NYSE:WEC), allocating a large percentage of their portfolios to this stock.

As you can see these stocks had an average of 24.25 hedge funds with bullish positions and the average amount invested in these stocks was $472 million. That figure was $438 million in WEC’s case. Cummins Inc. (NYSE:CMI) is the most popular stock in this table. On the other hand Fresenius Medical Care AG & Co. KGaA (NYSE:FMS) is the least popular one with only 7 bullish hedge fund positions. WEC Energy Group, Inc. (NYSE:WEC) is not the least popular stock in this group but hedge fund interest is still below average. Our calculations showed that top 20 most popular stocks among hedge funds returned 6.2% in Q2 through June 19th and outperformed the S&P 500 ETF (SPY) by nearly 3 percentage points. A small number of hedge funds were also right about betting on WEC as the stock returned 8.2% during the same time frame and outperformed the market by an even larger margin.