Is Waste Management, Inc. (WM) A Good Stock To Buy?

Investing in small cap stocks has historically been a way to outperform the market, as small cap companies typically grow faster on average than the blue chips. That outperformance comes with a price, however, as there are occasional periods of higher volatility. The last 8 months is one of those periods, as the Russell 2000 ETF (IWM) has underperformed the larger S&P 500 ETF (SPY) by nearly 9 percentage points. Given that the funds we track tend to have a disproportionate amount of their portfolios in smaller cap stocks, they have seen some volatility in their portfolios too. Actually their moves are potentially one of the factors that contributed to this volatility. In this article, we use our extensive database of hedge fund holdings to find out what the smart money thinks of Waste Management, Inc. (NYSE:WM).

Waste Management, Inc. (NYSE:WM) investors should be aware of a decrease in activity from the world’s largest hedge funds of late. WM was in 33 hedge funds’ portfolios at the end of March. There were 36 hedge funds in our database with WM positions at the end of the previous quarter. Our calculations also showed that wm isn’t among the 30 most popular stocks among hedge funds.

Heading into the second quarter of 2019, a total of 33 of the hedge funds tracked by Insider Monkey held long positions in this stock, a change of -8% from the fourth quarter of 2018. By comparison, 37 hedge funds held shares or bullish call options in WM a year ago. With hedge funds’ capital changing hands, there exists an “upper tier” of notable hedge fund managers who were adding to their holdings meaningfully (or already accumulated large positions). 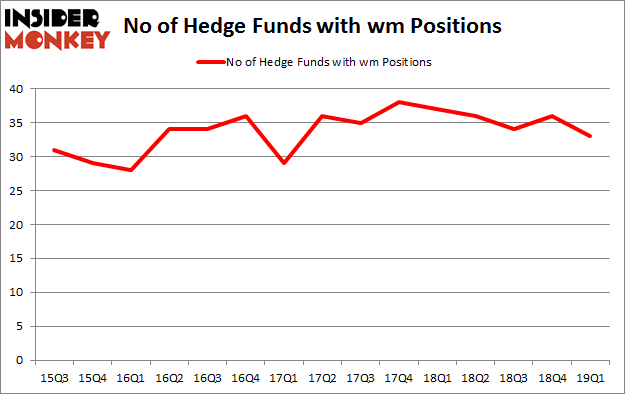 The largest stake in Waste Management, Inc. (NYSE:WM) was held by Bill & Melinda Gates Foundation Trust, which reported holding $1936.2 million worth of stock at the end of March. It was followed by AQR Capital Management with a $420.1 million position. Other investors bullish on the company included Adage Capital Management, Impax Asset Management, and Two Sigma Advisors.

Judging by the fact that Waste Management, Inc. (NYSE:WM) has experienced bearish sentiment from the aggregate hedge fund industry, it’s easy to see that there lies a certain “tier” of hedgies who were dropping their full holdings in the third quarter. At the top of the heap, Jim Simons’s Renaissance Technologies dumped the largest stake of the “upper crust” of funds tracked by Insider Monkey, comprising an estimated $54.7 million in stock. Greg Poole’s fund, Echo Street Capital Management, also cut its stock, about $29.5 million worth. These bearish behaviors are interesting, as total hedge fund interest fell by 3 funds in the third quarter.

Let’s now review hedge fund activity in other stocks – not necessarily in the same industry as Waste Management, Inc. (NYSE:WM) but similarly valued. We will take a look at Ecopetrol S.A. (NYSE:EC), JD.Com Inc (NASDAQ:JD), Telefonica S.A. (NYSE:TEF), and Phillips 66 (NYSE:PSX). All of these stocks’ market caps are closest to WM’s market cap.

As you can see these stocks had an average of 29 hedge funds with bullish positions and the average amount invested in these stocks was $1554 million. That figure was $3092 million in WM’s case. JD.Com Inc (NASDAQ:JD) is the most popular stock in this table. On the other hand Telefonica S.A. (NYSE:TEF) is the least popular one with only 10 bullish hedge fund positions. Waste Management, Inc. (NYSE:WM) is not the most popular stock in this group but hedge fund interest is still above average. Our calculations showed that top 20 most popular stocks among hedge funds returned 1.9% in Q2 through May 30th and outperformed the S&P 500 ETF (SPY) by more than 3 percentage points. Hedge funds were also right about betting on WM as the stock returned 4.3% during the same period and outperformed the market by an even larger margin. Hedge funds were rewarded for their relative bullishness.