Is Waste Connections, Inc. (WCN) A Good Stock To Buy?

Is Waste Connections, Inc. (NYSE:WCN) a good place to invest some of your money right now? We can gain invaluable insight to help us answer that question by studying the investment trends of top investors, who employ world-class Ivy League graduates, who are given immense resources and industry contacts to put their financial expertise to work. The top picks of these firms have historically outperformed the market when we account for known risk factors, making them very valuable investment ideas.

Is Waste Connections, Inc. (NYSE:WCN) a buy here? The best stock pickers are selling. The number of long hedge fund bets shrunk by 4 in recent months. Our calculations also showed that WCN isn’t among the 30 most popular stocks among hedge funds. WCN was in 30 hedge funds’ portfolios at the end of September. There were 34 hedge funds in our database with WCN holdings at the end of the previous quarter. 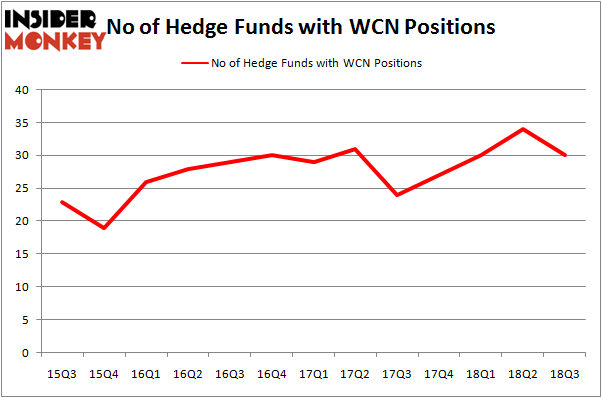 Among these funds, Maverick Capital held the most valuable stake in Waste Connections, Inc. (NYSE:WCN), which was worth $280.2 million at the end of the third quarter. On the second spot was Renaissance Technologies which amassed $221.4 million worth of shares. Moreover, Ascend Capital, Scopus Asset Management, and Echo Street Capital Management were also bullish on Waste Connections, Inc. (NYSE:WCN), allocating a large percentage of their portfolios to this stock.

Judging by the fact that Waste Connections, Inc. (NYSE:WCN) has witnessed a decline in interest from the aggregate hedge fund industry, it’s easy to see that there is a sect of hedge funds who sold off their entire stakes by the end of the third quarter. Interestingly, Glenn Russell Dubin’s Highbridge Capital Management said goodbye to the biggest stake of all the hedgies tracked by Insider Monkey, worth an estimated $8 million in stock. Dmitry Balyasny’s fund, Balyasny Asset Management, also dumped its stock, about $5.2 million worth. These bearish behaviors are intriguing to say the least, as total hedge fund interest was cut by 4 funds by the end of the third quarter.

As you can see these stocks had an average of 23 hedge funds with bullish positions and the average amount invested in these stocks was $542 million. That figure was $1.0 billion in WCN’s case. KeyCorp (NYSE:KEY) is the most popular stock in this table. On the other hand ORIX Corporation (NYSE:IX) is the least popular one with only 6 bullish hedge fund positions. Waste Connections, Inc. (NYSE:WCN) is not the most popular stock in this group but hedge fund interest is still above average. This is a slightly positive signal but we’d rather spend our time researching stocks that hedge funds are piling on. In this regard KEY might be a better candidate to consider a long position.