Yet the market recently contradicted Wal-Mart Stores, Inc. (NYSE:WMT), as consumer confidence rose to its highest level in nearly six years, with the benchmark Consumer Sentiment Index rising to 83.7 in May. Declining fuel prices, stronger job growth, and positive retail sales in April have strengthened the U.S. economy considerably, which led some investors to rightfully question if Wal-Mart’s problems are related to larger macro problems or its own operational inefficiencies.

Same-store sales (excluding fuel) in the United States declined 1.4% while total store visits slumped 1.8%, missing the company’s own forecast for flat to positive 2% same-store sales growth. This was the first time in six quarters that Wal-Mart Stores, Inc. (NYSE:WMT) reported negative same-store sales growth. International sales rose 2.9%, but Wal-Mart CEO Mike Duke stated that he was “disappointed” in the lack of expense controls in its smaller global segment.

Wal-Mart Stores, Inc. (NYSE:WMT) specifically noted that sales of warm-weather products, such as outdoor furniture, sporting goods and spring clothes, declined in March and April. Wal-Mart’s primary competitor, Target Corporation (NYSE:TGT), also recently warned that April same-store sales would come in flat, for the same reasons. Target also expects its first quarter earnings to miss the low end of its previous guidance of $1.10 to $1.20 per share. Target Corporation (NYSE:TGT) reports its first quarter earnings on May 22, and should give investors a better yardstick by which to measure Wal-Mart Stores, Inc. (NYSE:WMT)’s numbers.

Wal-Mart, Kohl’s, Target and other brick-and-mortar retailers have been working hard to boost their e-commerce initiatives, and they have been (very) slowly creeping up on Amazon.com, Inc. (NASDAQ:AMZN).

Last quarter, Amazon.com, Inc. (NASDAQ:AMZN) only reported 22% e-commerce growth, which disappointed analysts. However, Wal-Mart only projects $9 billion of e-commerce revenue for the current year (less than 2% of its top line) while Amazon generated $61 billion in online sales last year. This following chart shows exactly why Wal-Mart and its industry peers are valuing e-commerce growth so highly. 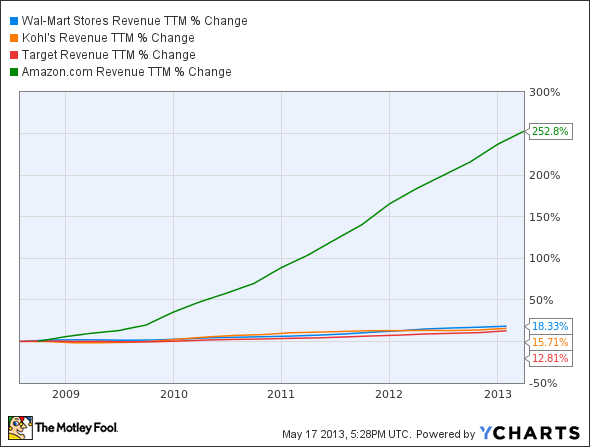 To catch up to the competition, Wal-Mart has invested heavily in tech companies to build its online initiative, @WalMartLabs. The company recently acquired cloud computing company OneOps and social-media e-commerce startup Tasty Labs to aggressively expand its reach onto mobile devices. In other words, Wal-Mart is no longer content to play defense against Amazon, it’s aiming to give Amazon a taste of its own medicine.

Expanding its e-commerce initiatives hasn’t come cheap for Wal-Mart. Unfortunately, Wal-Mart still has another big bill to pay over its bribery allegations in Mexico.

Last year, Wal-Mart was taken down by a flurry of bad publicity after The New York Times reported that Wal-Mart de Mexico had repeatedly bribed government officials to expedite its expansion into the country. To fend off possible government intervention, Wal-Mart spent heavily to start an inquiry into its own practices and possible violations of the Foreign Corrupt Practices Act.