Is Vishay Precision Group Inc (NYSE:VPG) worth your attention right now? Hedge funds are in a bearish mood. The number of bullish hedge fund bets decreased by 1 recently. Our calculations also showed that vpg isn’t among the 30 most popular stocks among hedge funds. VPG was in 15 hedge funds’ portfolios at the end of the third quarter of 2018. There were 16 hedge funds in our database with VPG holdings at the end of the previous quarter.

At the end of the third quarter, a total of 15 of the hedge funds tracked by Insider Monkey held long positions in this stock, a change of -6% from the previous quarter. The graph below displays the number of hedge funds with bullish position in VPG over the last 13 quarters. With hedge funds’ capital changing hands, there exists a few key hedge fund managers who were boosting their stakes significantly (or already accumulated large positions). 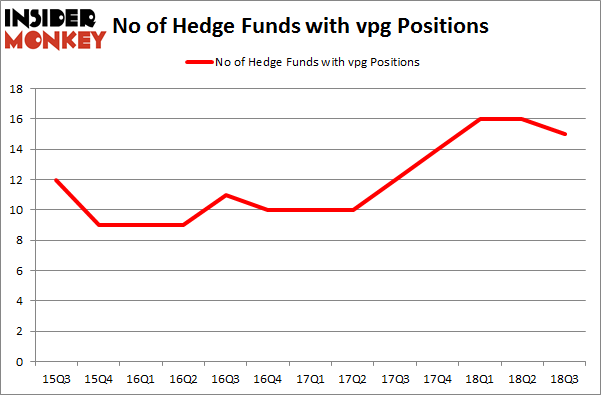 More specifically, Nokomis Capital was the largest shareholder of Vishay Precision Group Inc (NYSE:VPG), with a stake worth $72.7 million reported as of the end of September. Trailing Nokomis Capital was Renaissance Technologies, which amassed a stake valued at $27.1 million. D E Shaw, Harvey Partners, and Royce & Associates were also very fond of the stock, giving the stock large weights in their portfolios.

Due to the fact that Vishay Precision Group Inc (NYSE:VPG) has experienced a decline in interest from the entirety of the hedge funds we track, logic holds that there was a specific group of hedgies who were dropping their full holdings by the end of the third quarter. At the top of the heap, Peter Muller’s PDT Partners said goodbye to the largest investment of the “upper crust” of funds tracked by Insider Monkey, valued at an estimated $0.4 million in call options, and Matthew Hulsizer’s PEAK6 Capital Management was right behind this move, as the fund dropped about $0.2 million worth. These bearish behaviors are important to note, as total hedge fund interest dropped by 1 funds by the end of the third quarter.

As you can see these stocks had an average of 11 hedge funds with bullish positions and the average amount invested in these stocks was $73 million. That figure was $135 million in VPG’s case. Pure Acquisition Corp. (NASDAQ:PACQ) is the most popular stock in this table. On the other hand Blackrock Muni Intermediate Drtn Fnd Inc (NYSE:MUI) is the least popular one with only 3 bullish hedge fund positions. Vishay Precision Group Inc (NYSE:VPG) is not the most popular stock in this group but hedge fund interest is still above average. This is a slightly positive signal but we’d rather spend our time researching stocks that hedge funds are piling on. In this regard PACQ might be a better candidate to consider a long position.