Is Veritiv Corp (VRTV) A Good Stock To Buy?

Is Veritiv Corp (NYSE:VRTV) the right pick for your portfolio? Prominent investors are becoming hopeful. The number of long hedge fund bets went up by 8 in recent months. Our calculations also showed that VRTV isn’t among the 30 most popular stocks among hedge funds.

Today there are a large number of signals stock market investors have at their disposal to grade publicly traded companies. Some of the best signals are hedge fund and insider trading sentiment. Our experts have shown that, historically, those who follow the top picks of the elite money managers can outpace the S&P 500 by a healthy margin (see the details here).

How have hedgies been trading Veritiv Corp (NYSE:VRTV)?

Heading into the fourth quarter of 2018, a total of 13 of the hedge funds tracked by Insider Monkey were long this stock, a change of 160% from the previous quarter. By comparison, 6 hedge funds held shares or bullish call options in VRTV heading into this year. With hedgies’ positions undergoing their usual ebb and flow, there exists a few noteworthy hedge fund managers who were upping their stakes meaningfully (or already accumulated large positions). 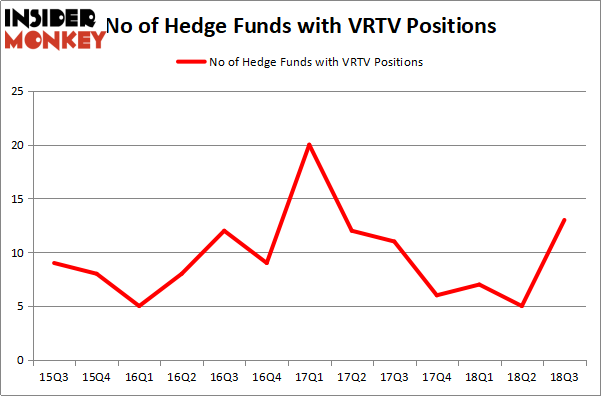 Among these funds, Baupost Group held the most valuable stake in Veritiv Corp (NYSE:VRTV), which was worth $129.7 million at the end of the third quarter. On the second spot was Laurion Capital Management which amassed $18.1 million worth of shares. Moreover, Key Square Capital Management, Soros Fund Management, and Moore Global Investments were also bullish on Veritiv Corp (NYSE:VRTV), allocating a large percentage of their portfolios to this stock.

As you can see these stocks had an average of 12.75 hedge funds with bullish positions and the average amount invested in these stocks was $51 million. That figure was $167 million in VRTV’s case. TETRA Technologies, Inc. (NYSE:TTI) is the most popular stock in this table. On the other hand Biglari Holdings Inc (NYSE:BH) is the least popular one with only 7 bullish hedge fund positions. Veritiv Corp (NYSE:VRTV) is not the most popular stock in this group but hedge fund interest is still above average. This is a slightly positive signal but we’d rather spend our time researching stocks that hedge funds are piling on. In this regard TTI might be a better candidate to consider a long position.