The fourth quarter was a rough one for most investors, as fears of a rising interest rate environment in the U.S, a trade war with China, and a more or less stagnant Europe, weighed heavily on the minds of investors. Both the S&P 500 and Russell 2000 sank as a result, with the Russell 2000, which is composed of smaller companies, being hit especially hard. This was primarily due to hedge funds, which are big supporters of small-cap stocks, pulling some of their capital out of the volatile markets during this time. Let’s look at how this market volatility affected the sentiment of hedge funds towards Valmont Industries, Inc. (NYSE:VMI), and what that likely means for the prospects of the company and its stock.

Is Valmont Industries, Inc. (NYSE:VMI) an exceptional investment right now? The best stock pickers are selling. The number of bullish hedge fund positions fell by 3 lately. Our calculations also showed that VMI isn’t among the 30 most popular stocks among hedge funds. VMI was in 17 hedge funds’ portfolios at the end of the third quarter of 2018. There were 20 hedge funds in our database with VMI holdings at the end of the previous quarter.

At Q3’s end, a total of 17 of the hedge funds tracked by Insider Monkey held long positions in this stock, a change of -15% from the previous quarter. By comparison, 20 hedge funds held shares or bullish call options in VMI heading into this year. With the smart money’s sentiment swirling, there exists a select group of key hedge fund managers who were upping their stakes substantially (or already accumulated large positions). 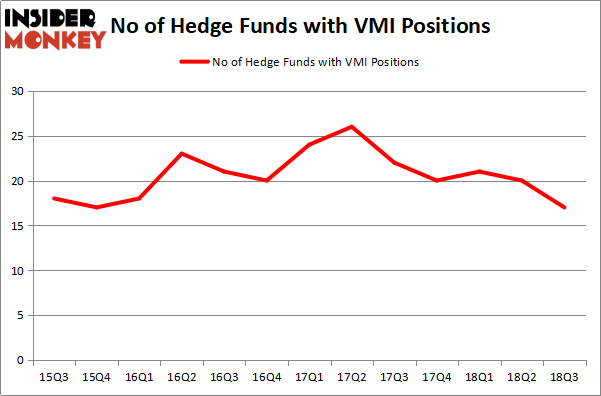 According to publicly available hedge fund and institutional investor holdings data compiled by Insider Monkey, Royce & Associates, managed by Chuck Royce, holds the most valuable position in Valmont Industries, Inc. (NYSE:VMI). Royce & Associates has a $97.2 million position in the stock, comprising 0.7% of its 13F portfolio. The second largest stake is held by Impax Asset Management, managed by Ian Simm, which holds a $90.6 million position; 1.3% of its 13F portfolio is allocated to the company. Some other professional money managers that hold long positions consist of Seth Rosen’s Nitorum Capital, Richard S. Meisenberg’s ACK Asset Management and Jim Simons’s Renaissance Technologies.

Seeing as Valmont Industries, Inc. (NYSE:VMI) has experienced declining sentiment from the aggregate hedge fund industry, logic holds that there were a few funds that slashed their positions entirely by the end of the third quarter. Interestingly, Steve Cohen’s Point72 Asset Management sold off the largest position of all the hedgies monitored by Insider Monkey, comprising about $3.5 million in stock. Noam Gottesman’s fund, GLG Partners, also sold off its stock, about $1.2 million worth. These bearish behaviors are interesting, as aggregate hedge fund interest dropped by 3 funds by the end of the third quarter.

As you can see these stocks had an average of 21 hedge funds with bullish positions and the average amount invested in these stocks was $385 million. That figure was $285 million in VMI’s case. Wright Medical Group N.V. (NASDAQ:WMGI) is the most popular stock in this table. On the other hand Corporate Office Properties Trust (NYSE:OFC) is the least popular one with only 10 bullish hedge fund positions. Valmont Industries, Inc. (NYSE:VMI) is not the least popular stock in this group but hedge fund interest is still below average. This is a slightly negative signal and we’d rather spend our time researching stocks that hedge funds are piling on. In this regard WMGI might be a better candidate to consider a long position.