Is Urban Edge Properties (UE) A Good Stock To Buy?

Insider Monkey finished processing more than 700 13F filings made by hedge funds and prominent investors. These filings show these funds’ portfolio positions as of September 30th. In this article we are going to take a look at smart money sentiment towards Urban Edge Properties (NYSE:UE).

Is Urban Edge Properties (NYSE:UE) the right pick for your portfolio? Investors who are in the know are getting more bullish. The number of long hedge fund positions rose by 2 recently. Our calculations also showed that ue isn’t among the 30 most popular stocks among hedge funds.

At the end of the third quarter, a total of 12 of the hedge funds tracked by Insider Monkey held long positions in this stock, a change of 20% from the second quarter of 2018. The graph below displays the number of hedge funds with bullish position in UE over the last 13 quarters. So, let’s check out which hedge funds were among the top holders of the stock and which hedge funds were making big moves. 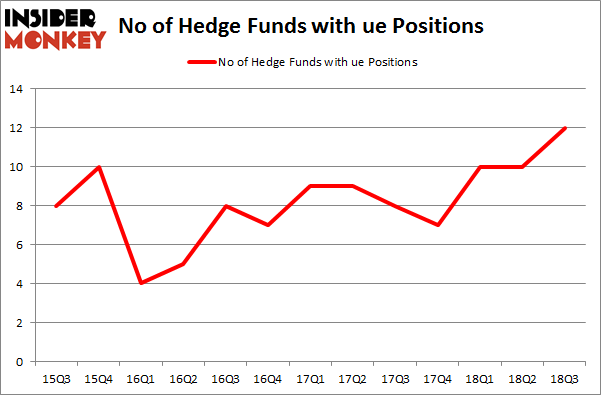 The largest stake in Urban Edge Properties (NYSE:UE) was held by Citadel Investment Group, which reported holding $24.8 million worth of stock at the end of September. It was followed by Balyasny Asset Management with a $22.1 million position. Other investors bullish on the company included Millennium Management, Renaissance Technologies, and D E Shaw.

Consequently, some big names have jumped into Urban Edge Properties (NYSE:UE) headfirst. Renaissance Technologies, managed by Jim Simons, initiated the biggest position in Urban Edge Properties (NYSE:UE). Renaissance Technologies had $7 million invested in the company at the end of the quarter. Paul Tudor Jones’s Tudor Investment Corp also made a $1.3 million investment in the stock during the quarter. The following funds were also among the new UE investors: Matthew Tewksbury’s Stevens Capital Management and Benjamin A. Smith’s Laurion Capital Management.

As you can see these stocks had an average of 13 hedge funds with bullish positions and the average amount invested in these stocks was $149 million. That figure was $75 million in UE’s case. Aspen Insurance Holdings Limited (NYSE:AHL) is the most popular stock in this table. On the other hand Apollo Commercial Real Est. Finance Inc (NYSE:ARI) is the least popular one with only 7 bullish hedge fund positions. Urban Edge Properties (NYSE:UE) is not the least popular stock in this group but hedge fund interest is still below average. This is a slightly negative signal and we’d rather spend our time researching stocks that hedge funds are piling on. In this regard AHL might be a better candidate to consider a long position.