Hedge funds are not perfect. They have their bad picks just like everyone else. Facebook, a stock hedge funds have loved, lost a third of its value since the end of July. Although hedge funds are not perfect, their consensus picks do deliver solid returns, however. Our data show the top 30 S&P 500 stocks among hedge funds at the end of September 2018 yielded an average return of 6.7% year-to-date, vs. a gain of 2.6% for the S&P 500 Index. Because hedge funds have a lot of resources and their consensus picks do well, we pay attention to what they think. In this article, we analyze what the elite funds think of Universal Insurance Holdings, Inc. (NYSEAMEX:UVE).

Universal Insurance Holdings, Inc. (NYSEAMEX:UVE) has seen a decrease in hedge fund sentiment lately. Our calculations also showed that UVE isn’t among the 30 most popular stocks among hedge funds. 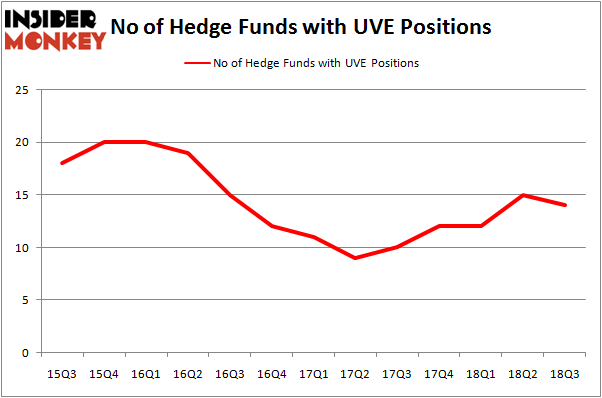 Of the funds tracked by Insider Monkey, AQR Capital Management, managed by Cliff Asness, holds the biggest position in Universal Insurance Holdings, Inc. (NYSEAMEX:UVE). AQR Capital Management has a $15.5 million position in the stock, comprising less than 0.1%% of its 13F portfolio. The second most bullish fund manager is Arrowstreet Capital, led by Peter Rathjens, Bruce Clarke and John Campbell, holding a $12 million position; less than 0.1%% of its 13F portfolio is allocated to the stock. Some other members of the smart money that are bullish encompass Chuck Royce’s Royce & Associates, John Overdeck and David Siegel’s Two Sigma Advisors and Matthew Hulsizer’s PEAK6 Capital Management.

Because Universal Insurance Holdings, Inc. (NYSEAMEX:UVE) has faced bearish sentiment from the entirety of the hedge funds we track, it’s easy to see that there lies a certain “tier” of funds who sold off their entire stakes last quarter. Intriguingly, Mitch Cantor’s Mountain Lake Investment Management cut the largest position of the “upper crust” of funds followed by Insider Monkey, valued at about $7 million in stock. Dmitry Balyasny’s fund, Balyasny Asset Management, also said goodbye to its stock, about $0.7 million worth. These bearish behaviors are important to note, as total hedge fund interest dropped by 1 funds last quarter.

As you can see these stocks had an average of 17 hedge funds with bullish positions and the average amount invested in these stocks was $97 million. That figure was $44 million in UVE’s case. AAR Corp. (NYSE:AIR) is the most popular stock in this table. On the other hand Wageworks Inc (NYSE:WAGE) is the least popular one with only 12 bullish hedge fund positions. Universal Insurance Holdings, Inc. (NYSEAMEX:UVE) is not the least popular stock in this group but hedge fund interest is still below average. This is a slightly negative signal and we’d rather spend our time researching stocks that hedge funds are piling on. In this regard AIR might be a better candidate to consider a long position.