Hedge fund interest in Two Harbors Investment Corp (NYSE:TWO) shares was flat at the end of last quarter. This is usually a negative indicator. The level and the change in hedge fund popularity aren’t the only variables you need to analyze to decipher hedge funds’ perspectives. A stock may witness a boost in popularity but it may still be less popular than similarly priced stocks. That’s why at the end of this article we will examine companies such as Americold Realty Trust (NYSE:COLD), Black Stone Minerals LP (NYSE:BSM), and Ensco plc (NYSE:ESV) to gather more data points.

At the end of the third quarter, a total of 14 of the hedge funds tracked by Insider Monkey held long positions in this stock, representing no change from one quarter earlier. By comparison, 17 hedge funds held shares or bullish call options in TWO heading into this year. With hedge funds’ positions undergoing their usual ebb and flow, there exists a select group of key hedge fund managers who were adding to their stakes significantly (or already accumulated large positions). 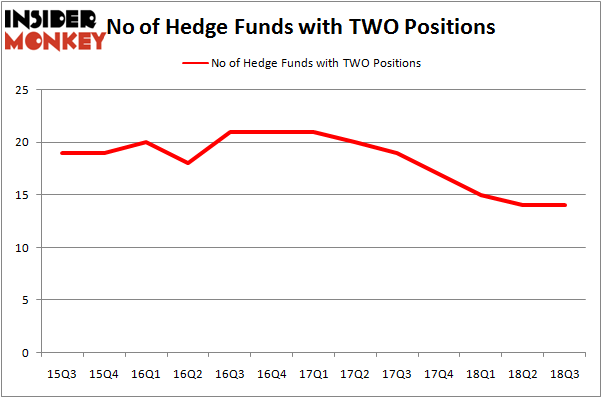 Among these funds, Citadel Investment Group held the most valuable stake in Two Harbors Investment Corp (NYSE:TWO), which was worth $80.1 million at the end of the third quarter. On the second spot was Renaissance Technologies which amassed $25.2 million worth of shares. Moreover, Millennium Management, PEAK6 Capital Management, and HBK Investments were also bullish on Two Harbors Investment Corp (NYSE:TWO), allocating a large percentage of their portfolios to this stock.

Due to the fact that Two Harbors Investment Corp (NYSE:TWO) has faced declining sentiment from the smart money, it’s safe to say that there lies a certain “tier” of funds that elected to cut their positions entirely last quarter. Intriguingly, Paul Tudor Jones’s Tudor Investment Corp dumped the largest position of the “upper crust” of funds monitored by Insider Monkey, comprising an estimated $1.1 million in stock. Paul Marshall and Ian Wace’s fund, Marshall Wace LLP, also dropped its stock, about $0.9 million worth. These moves are intriguing to say the least, as aggregate hedge fund interest stayed the same (this is a bearish signal in our experience).

As you can see these stocks had an average of 15.75 hedge funds with bullish positions and the average amount invested in these stocks was $334 million. That figure was $122 million in TWO’s case. Ensco plc (NYSE:ESV) is the most popular stock in this table. On the other hand Black Stone Minerals LP (NYSE:BSM) is the least popular one with only 5 bullish hedge fund positions. Two Harbors Investment Corp (NYSE:TWO) is not the least popular stock in this group but hedge fund interest is still below average. This is a slightly negative signal and we’d rather spend our time researching stocks that hedge funds are piling on. In this regard ESV might be a better candidate to consider a long position.