Is Trimble Inc. (TRMB) A Good Stock To Buy?

Trimble Inc. (NASDAQ:TRMB) was in 14 hedge funds’ portfolios at the end of March. TRMB shareholders have witnessed a decrease in activity from the world’s largest hedge funds of late. There were 17 hedge funds in our database with TRMB positions at the end of the previous quarter. Our calculations also showed that TRMB isn’t among the 30 most popular stocks among hedge funds.

At Q1’s end, a total of 14 of the hedge funds tracked by Insider Monkey held long positions in this stock, a change of -18% from one quarter earlier. The graph below displays the number of hedge funds with bullish position in TRMB over the last 15 quarters. With hedgies’ positions undergoing their usual ebb and flow, there exists a few notable hedge fund managers who were increasing their stakes considerably (or already accumulated large positions). 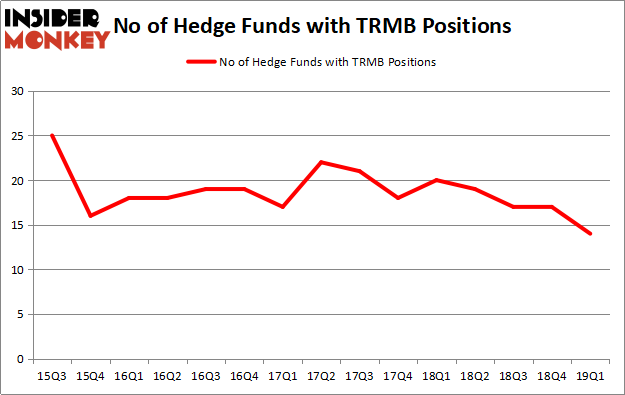 Among these funds, Impax Asset Management held the most valuable stake in Trimble Inc. (NASDAQ:TRMB), which was worth $246 million at the end of the first quarter. On the second spot was Select Equity Group which amassed $192.1 million worth of shares. Moreover, D E Shaw, PDT Partners, and Millennium Management were also bullish on Trimble Inc. (NASDAQ:TRMB), allocating a large percentage of their portfolios to this stock.

Because Trimble Inc. (NASDAQ:TRMB) has experienced declining sentiment from the entirety of the hedge funds we track, it’s safe to say that there is a sect of fund managers who sold off their full holdings in the third quarter. At the top of the heap, Jim Simons’s Renaissance Technologies sold off the biggest position of the “upper crust” of funds watched by Insider Monkey, totaling close to $4.2 million in stock, and Ray Dalio’s Bridgewater Associates was right behind this move, as the fund said goodbye to about $2 million worth. These bearish behaviors are intriguing to say the least, as aggregate hedge fund interest dropped by 3 funds in the third quarter.

As you can see these stocks had an average of 17 hedge funds with bullish positions and the average amount invested in these stocks was $435 million. That figure was $573 million in TRMB’s case. FMC Corporation (NYSE:FMC) is the most popular stock in this table. On the other hand Sociedad Química y Minera de Chile S.A. (NYSE:SQM) is the least popular one with only 9 bullish hedge fund positions. Trimble Inc. (NASDAQ:TRMB) is not the least popular stock in this group but hedge fund interest is still below average. Our calculations showed that top 20 most popular stocks among hedge funds returned 6.2% in Q2 through June 19th and outperformed the S&P 500 ETF (SPY) by nearly 3 percentage points. A small number of hedge funds were also right about betting on TRMB as the stock returned 8% during the same time frame and outperformed the market by an even larger margin.

Hedge Funds Have Never Been This Bullish On Central Puerto S.A. (CEPU)
Monthly Newsletter Strategy
Download a free copy of our newsletter and see the details inside!
Hedge Fund Resource Center
Related News
Did Hedge Funds Drop The Ball On Stagnant On Trimble Inc. (TRMB) ? Is Trimble Inc. (TRMB) A Good Stock To Buy? Hedge Funds Are Crazy About Trimble Inc (TRMB) Why Trimble, Open Text, Prospect Capital, Nuance & Criteo Are Spiking Today Is Trimble Navigation Limited (TRMB) A Good Stock To Buy? Why Are These Four Stocks Surging on Friday? Garmin Ltd. (GRMN), Trimble Navigation Limited (TRMB): Cell Phones a Problem for GPS Makers, But Not This One 25 Biggest Activist Short Sellers in the Hedge Fund World 21 Best Tinder Bio Examples for Newly Single Moms 17 Best Excuses to Get Out of Work
Billionaire Hedge Funds