Is TopBuild Corp (BLD) A Good Stock To Buy?

The market has been volatile as the Federal Reserve continues its rate hikes to normalize the interest rates. Small cap stocks have been hit hard as a result, as the Russell 2000 ETF (IWM) has underperformed the larger S&P 500 ETF (SPY) by about 4 percentage points through November 16th. SEC filings and hedge fund investor letters indicate that the smart money seems to be paring back their overall long exposure since summer months, and the funds’ movements is one of the reasons why the major indexes have retraced. In this article, we analyze what the smart money thinks of TopBuild Corp (NYSE:BLD) and find out how it is affected by hedge funds’ moves.

TopBuild Corp (NYSE:BLD) investors should pay attention to an increase in hedge fund interest of late. BLD was in 18 hedge funds’ portfolios at the end of the third quarter of 2018. There were 13 hedge funds in our database with BLD holdings at the end of the previous quarter. Our calculations also showed that bld isn’t among the 30 most popular stocks among hedge funds.

At the moment there are numerous metrics shareholders use to evaluate stocks. A pair of the less known metrics are hedge fund and insider trading interest. Our researchers have shown that, historically, those who follow the best picks of the elite hedge fund managers can outpace the S&P 500 by a very impressive margin (see the details here).

What does the smart money think about TopBuild Corp (NYSE:BLD)?

Heading into the fourth quarter of 2018, a total of 18 of the hedge funds tracked by Insider Monkey held long positions in this stock, a change of 38% from the second quarter of 2018. Below, you can check out the change in hedge fund sentiment towards BLD over the last 13 quarters. With hedge funds’ capital changing hands, there exists a few notable hedge fund managers who were increasing their holdings considerably (or already accumulated large positions). 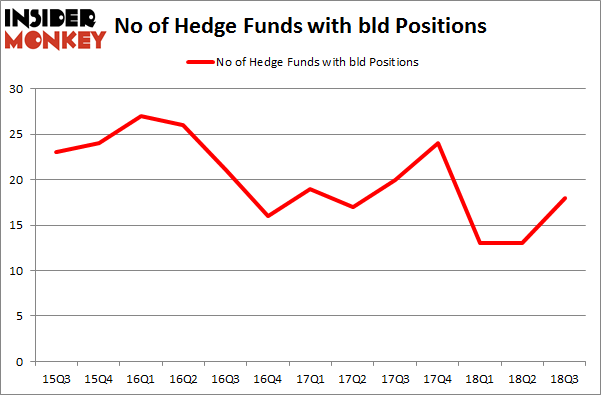 More specifically, Adage Capital Management was the largest shareholder of TopBuild Corp (NYSE:BLD), with a stake worth $42.6 million reported as of the end of September. Trailing Adage Capital Management was Marshall Wace LLP, which amassed a stake valued at $31.4 million. Lodge Hill Capital, Latimer Light Capital, and Renaissance Technologies were also very fond of the stock, giving the stock large weights in their portfolios.

As you can see these stocks had an average of 13.5 hedge funds with bullish positions and the average amount invested in these stocks was $105 million. That figure was $142 million in BLD’s case. Advanced Energy Industries, Inc. (NASDAQ:AEIS) is the most popular stock in this table. On the other hand Evoqua Water Technologies Corp. (NYSE:AQUA) is the least popular one with only 11 bullish hedge fund positions. TopBuild Corp (NYSE:BLD) is not the most popular stock in this group but hedge fund interest is still above average. This is a slightly positive signal but we’d rather spend our time researching stocks that hedge funds are piling on. In this regard AEIS might be a better candidate to consider a long position.

Hedge Funds Are Selling EnerSys (ENS)
Monthly Newsletter Strategy
Download a free copy of our newsletter and see the details inside!
Hedge Fund Resource Center
Related News
Here’s Why These Five Stocks Are in the Spotlight Should You Avoid TopBuild Corp (BLD)? Is TopBuild Corp (BLD) Going to Burn These Hedge Funds? 11 Countries With The Worst Modern Music In The World The Top 5 Robo Advisor Apps of 2018 Five Reasons You Need a Day-Trading Mentor
Billionaire Hedge Funds