The market has been volatile in the last 6 months as the Federal Reserve continued its rate hikes and then abruptly reversed its stance and uncertainty looms over trade negotiations with China. Small cap stocks have been hit hard as a result, as the Russell 2000 ETF (IWM) has underperformed the larger S&P 500 ETF (SPY) by nearly 9 percentage points. SEC filings and hedge fund investor letters indicate that the smart money seems to be paring back their overall long exposure since summer months, though some funds increased their exposure dramatically at the end of Q4 and the beginning of Q1. In this article, we analyze what the smart money thinks of Tiffany & Co. (NYSE:TIF) and find out how it is affected by hedge funds’ moves.

Hedge fund interest in Tiffany & Co. (NYSE:TIF) shares was flat at the end of last quarter. This is usually a negative indicator. At the end of this article we will also compare TIF to other stocks including UDR, Inc. (NYSE:UDR), Invitation Homes Inc. (NYSE:INVH), and Centrais Eletricas Brasileiras SA (NYSE:EBR) to get a better sense of its popularity.

How have hedgies been trading Tiffany & Co. (NYSE:TIF)?

At Q1’s end, a total of 30 of the hedge funds tracked by Insider Monkey were bullish on this stock, a change of 0% from one quarter earlier. Below, you can check out the change in hedge fund sentiment towards TIF over the last 15 quarters. With hedge funds’ sentiment swirling, there exists an “upper tier” of noteworthy hedge fund managers who were upping their holdings meaningfully (or already accumulated large positions). 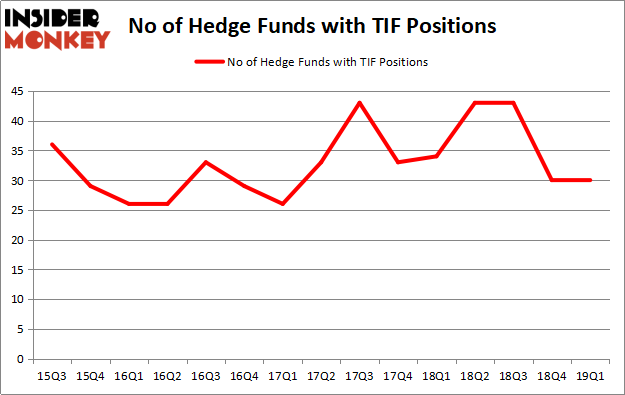 The largest stake in Tiffany & Co. (NYSE:TIF) was held by Lone Pine Capital, which reported holding $715.2 million worth of stock at the end of March. It was followed by Egerton Capital Limited with a $327.2 million position. Other investors bullish on the company included Thunderbird Partners, Brahman Capital, and JANA Partners.

Judging by the fact that Tiffany & Co. (NYSE:TIF) has faced bearish sentiment from the smart money, we can see that there was a specific group of funds that decided to sell off their entire stakes in the third quarter. Interestingly, Richard Chilton’s Chilton Investment Company sold off the biggest position of the “upper crust” of funds monitored by Insider Monkey, totaling close to $29.9 million in stock. Jim Simons’s fund, Renaissance Technologies, also dumped its stock, about $29.5 million worth. These bearish behaviors are important to note, as total hedge fund interest stayed the same (this is a bearish signal in our experience).

As you can see these stocks had an average of 24.5 hedge funds with bullish positions and the average amount invested in these stocks was $1051 million. That figure was $1663 million in TIF’s case. Vistra Energy Corp. (NYSE:VST) is the most popular stock in this table. On the other hand Centrais Eletricas Brasileiras SA (NYSE:EBR) is the least popular one with only 8 bullish hedge fund positions. Tiffany & Co. (NYSE:TIF) is not the most popular stock in this group but hedge fund interest is still above average. This is a slightly positive signal but we’d rather spend our time researching stocks that hedge funds are piling on. Our calculations showed that top 20 most popular stocks among hedge funds returned 1.9% in Q2 through May 30th and outperformed the S&P 500 ETF (SPY) by more than 3 percentage points. Unfortunately TIF wasn’t nearly as popular as these 20 stocks and hedge funds that were betting on TIF were disappointed as the stock returned -14.7% during the same period and underperformed the market. If you are interested in investing in large cap stocks with huge upside potential, you should check out the top 20 most popular stocks among hedge funds as 13 of these stocks already outperformed the market so far in Q2.