Is The Western Union Company (WU) A Good Stock To Buy?

Is The Western Union Company (NYSE:WU) an attractive investment now? Hedge funds are turning less bullish. The number of bullish hedge fund positions dropped by 1 in recent months. Our calculations also showed that WU isn’t among the 30 most popular stocks among hedge funds. WU was in 20 hedge funds’ portfolios at the end of the third quarter of 2018. There were 21 hedge funds in our database with WU positions at the end of the previous quarter.

Let’s take a look at the recent hedge fund action regarding The Western Union Company (NYSE:WU).

How have hedgies been trading The Western Union Company (NYSE:WU)? 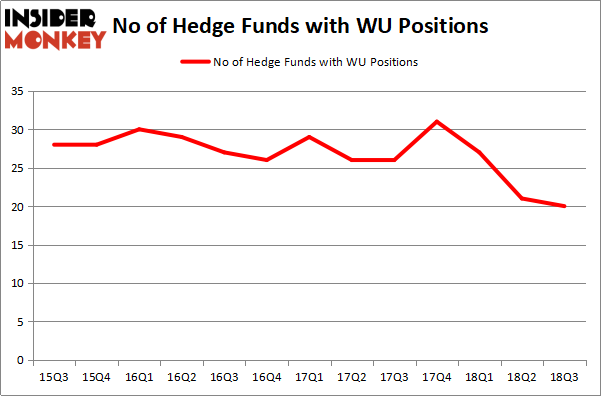 Since The Western Union Company (NYSE:WU) has witnessed bearish sentiment from the smart money, logic holds that there were a few money managers who were dropping their positions entirely in the third quarter. It’s worth mentioning that George Hall’s Clinton Group dropped the largest position of all the hedgies monitored by Insider Monkey, totaling an estimated $3.5 million in stock. Jeffrey Talpins’s fund, Element Capital Management, also cut its stock, about $2.4 million worth. These bearish behaviors are intriguing to say the least, as aggregate hedge fund interest fell by 1 funds in the third quarter.

As you can see these stocks had an average of 20.75 hedge funds with bullish positions and the average amount invested in these stocks was $628 million. That figure was $668 million in WU’s case. FLIR Systems, Inc. (NASDAQ:FLIR) is the most popular stock in this table. On the other hand IPG Photonics Corporation (NASDAQ:IPGP) is the least popular one with only 16 bullish hedge fund positions. The Western Union Company (NYSE:WU) is not the least popular stock in this group but hedge fund interest is still below average. This is a slightly negative signal and we’d rather spend our time researching stocks that hedge funds are piling on. In this regard FLIR might be a better candidate to consider a long position.