Is the Time Ripe to Buy Johnson & Johnson (JNJ) Stock?

If you owned Johnson & Johnson (NYSE:JNJ) stock at the beginning of 2013, you’re sitting atop gains of more than 20% right now. If you didn’t own shares of J&J, you might be wishing that you did. Is the time still ripe to buy — or has the train left the station? Let’s take a look.

After a stellar start in 2013, Johnson & Johnson (NYSE:JNJ) has taken a little breather since late May. Shares have pulled back slightly. 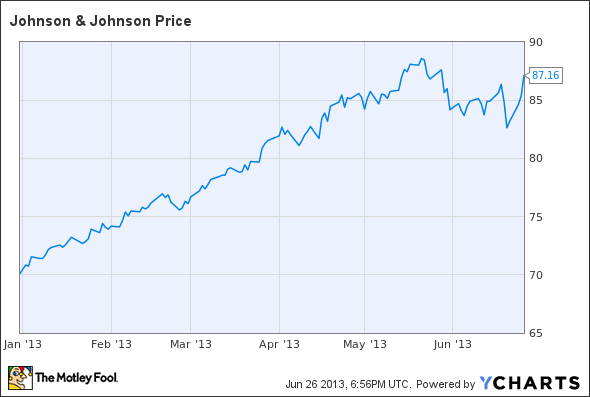 I actually view this as a good development. The S&P 500 index also pulled back during the same period, but Johnson & Johnson (NYSE:JNJ) shares retreated by less than half as much as the broader index. This reflects solid investor support for the stock.

It’s been a while since J&J enjoyed such a nice run. The company has encountered some rough spots over the last few years, particularly with product recalls and litigation woes. These issues even resulted in Warren Buffett dumping much of his stake, saying that Johnson & Johnson (NYSE:JNJ) had made “too many mistakes.”

Of course, J&J hasn’t been alone in climbing this year. Many blue chips have performed well in 2013 thus far. Among its peers, though, Johnson & Johnson (NYSE:JNJ) stock looks to be one of the biggest winners.

Fellow pharmaceutical giant Pfizer Inc. (NYSE:PFE) saw its shares jump more than 20% by April. However, the stock has fallen quite a bit since then. Shares are now only up less than 13%.

Although its quite smaller in terms of market cap, Abbott Laboratories (NYSE:ABT) has a business model closer to that of Johnson & Johnson than most other pharmaceutical firms. Abbott shares followed a similar path as Merck & Co., Inc. (NYSE:MRK) — up more than 20% before falling. The stock is now up around 14% for the year.

Since J&J didn’t pull back as much as some of its peers, is it now much pricier as a result? Not necessarily.

Its trailing price-to-earnings multiple of below 24 stands very close to that of Merck. Pfizer Inc. (NYSE:PFE) and Abbott Laboratories (NYSE:ABT) have significantly lower trailing P/E values of less than 14 and 11, respectively. However, looking ahead paints a different picture.

Abbott’s forward P/E of almost 16 ranks as the highest of the four companies. J&J trails with a forward P/E a little under 15. Meanwhile, Pfizer and Merck both have forward multiples between 12 and 13. Factoring in these expectations of future earnings makes Johnson & Johnson stock look reasonably priced in comparison with the other stocks.

For investors looking at the long run, Johnson & Johnson is nearly always worth consideration. Just as Warren Buffett said when discussing the company’s mistakes in recent years, J&J has “a lot of wonderful products and it’s got a wonderful balance sheet.”

I’d throw in a wonderful dividend yield to that mix. J&J’s yield currently stands at 3.2%. Is the time ripe to buy Johnson & Johnson stock? The signs point to it being a wonderful time.

The article Is the Time Ripe to Buy Johnson & Johnson Stock? originally appeared on Fool.com and is written by Keith Speights.