Is the Sun Starting to Shine on SunPower Corporation (SPWR)?

SunPower Corporation (NASDAQ:SPWR) has a number of catalysts that are boosting its outlook. The Chinese-European trade war, Japan’s favorable feed in tariffs and strong partnerships are changing the company’s prospects. Momentum traders have taken hold of the stock and sent it flying, but fundamental investors should be aware that this boom is more than just hot air. 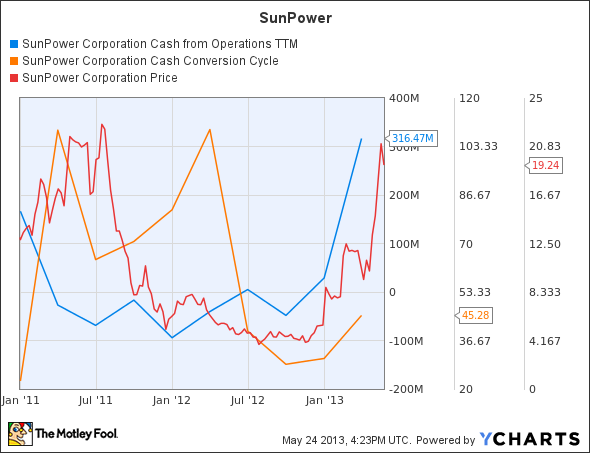 SunPower Corporation (NASDAQ:SPWR) has played its cards very well in the land of the rising sun. The government decided to offer a fat feed in tariff of 42 yen for 20 years for installations over 10 kilowatts (KW) or 42 yen for 10 years for installations under 10 KW. In Q1, 2013 Sunpower’s agreements with the Japanese companies Toshiba and Sharp brought in around 25% of all first quarter shipments.

SunPower Corporation (NASDAQ:SPWR)’s high efficiency cells are a great fit for the densely populated island. The company still has a way to go, but its global operations managed to produce $216 million in free cash flow in Q1, 2013.

First Solar, Inc. (NASDAQ:FSLR)  is another U.S. firm that could benefit from the Japanese market and Chinese-Japanese antagonism. First Solar faces a number of challenges as its panel efficiencies are not nearly as high as the 21.5% offered by SunPower Corporation (NASDAQ:SPWR)’s X-Series panels. In a space constrained nation like Japan, panel efficiency is very important because it decrease real estate costs.

First Solar, Inc. (NASDAQ:FSLR) is working to increase its panel efficiencies, but serious improvements will take a couple of years to bring to market. With Japan’s very high feed in tariffs, there is a good chance that the market could overheat and First Solar may be stuck picking up the crumbs.

Even if First Solar’s growth prospects are not amazing, it is one of the few profitable solar manufactures. It has healthy profit margin 11.4% and a return on investment (ROI) of 9.9%. The firm’s thin film technology has proved to be very popular with utility customers, but as the retail and the commercial market heats up it remains to be seen just how First Solar will fare.

SunPower Corporation (NASDAQ:SPWR) and First Solar will benefit from the stiff 67.9% European tariffs on Chinese panels. When China attacks a problem it doesn’t go for a small solution. The Chinese government made solar manufacturing a national priority and created a global supply-demand imbalance that lead to Chinese dumping.

The bankruptcy of Suntech Power Holdings Co., Ltd. (ADR) (NYSE:STP) will help to correct this massive supply-demand imbalance and return pricing power to manufacturers. The company has$3.1 billion in total current liabilities andit defaulted on a $541 million convertible bond payment earlier this year.

Suntech Power Holdings Co., Ltd. (ADR) (NYSE:STP)‘s downfall wasn’t a surprise, as its latest quarterly report shows that it had just $474 million in cash; a serious decline from $648 million in June 2011. Continued advancements in manufacturing technologies mean that Suntech would be forced to spend billions that it doesn’t have on capital equipment, if it wants to stay competitive.

On the positive side, the company is one of the world’s most powerful low-cost producers. As of Q4, 2012 its overall non-silicon cost was $0.48 per watt and its overall silicon cost was $0.15 per watt. In the worst case scenario the firm would use its low costs to reorient itself to markets outside of the U.S. and the European Union.