This might sound like a normal event on Wall Street, but this firing had some unique circumstances.

Not only did the firing take place on the same day of the annual shareholder meeting, but that meeting was canceled due to the firing. Could the timing have been any worse?

Will fundamentals win out in the end?

The Men’s Wearhouse, Inc. (NYSE:MW) has consistently improved its revenue and earnings over the past three years. In the first quarter, revenue improved 5.10% year over year, and earnings improved 23%.

But has The Men’s Wearhouse, Inc. (NYSE:MW) performed well compared to peers Jos. A. Bank Clothiers Inc (NASDAQ:JOSB) and Kohl’s Corporation (NYSE:KSS) over the past several years? 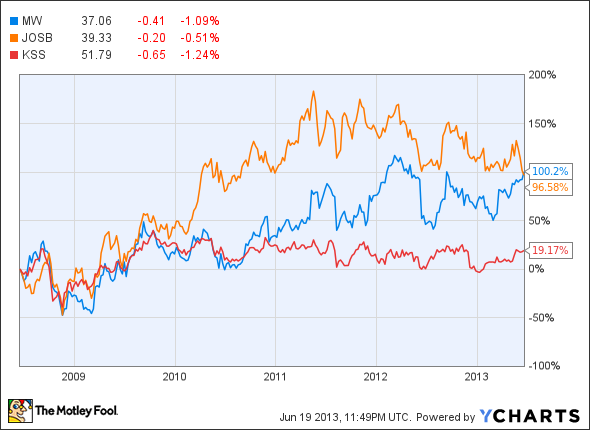 The short interest on these companies are high:

When the consumer is weakening, it’s only a matter of time before the retail sector gets hit. This is likely the biggest reason for the high short positions. Sometimes shorts attack a company with unmanageable debt loads, but debt management is good for all three companies.

Men’s Wearhouse might have the smallest short position, but after today’s events, it might become the riskiest of the three companies mentioned above. Kohl’s is likely to be the safest investment going forward thanks to its product diversification. Men’s Wearhouse and Jos. A Bank are focused solely on menswear.

Numbers are important, but sometimes other factors play a bigger role.

For instance, Men’s Wearhouse customers are looking at yesterday’s firing as a tasteless and despicable move. If you read any article covering the story, look at the comments on the bottom of the page. Customers don’t like the way the firing was handled, and the vast majority of them state that they will never shop at Men’s Wearhouse again. The most infuriating detail: George Zimmer was fired by the man he hired as CEO two years earlier.